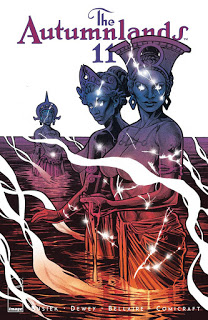 Another edition of the Pull List review column topped the list at The Angriest in June. In this case 22 June part 2 took the honours, with reviews of The Autumnlands (really, go read this comic), Doctor Strange, Darth Vader and Usagi Yojimbo.

Other popular posts this month included reviews of the excellent Star Trek: The Next Generation episode "Darmok", and the significantly less excellent Terminator: Genisys.

This month I went a bit TV show crazy, particularly in regards to Star Trek: The Next Generation - Season 5 is so good - and Colditz. It is Colditz that has impressed me the most: I had heard of the series for years but had never watched it before, and it is outstanding dramatic television, particularly considering it was made in 1972.

In June 2016 The Angriest featured reviews of two recent films (The Conjuring 2 and The 5th Wave) and nine older films, as well as 27 TV episodes, three anime episodes, 45 comic books, one graphic novel and six videogames. A full index of June 2016 blog posts is included below the cut.