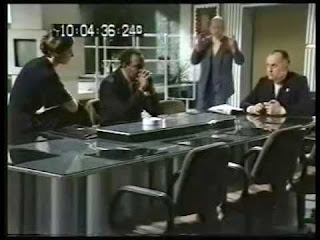 With his appeal to exit Britain rejected, Dr Vickers (Donald Gee) looks for other means of leaving the country. Meanwhile Kyle (Edward Woodward) finds himself drawn into an internal power struggle within the Department of Public Control.

One of the best things about 1990, a near-future dystopia created by Wilfred Greatorex for the BBC, is that it is a subtle dystopia. This is not a future Britain populated by jackbooted guards and Nineteen Eighty-Four style mass oppression. Don't get me wrong, it's getting there, but it is still a lot closer to the real world than it is to George Orwell. That in itself makes 1990 an uncomfortable watch. The world in the real-life 2016 seems an awful lot closer to Greatorex's 1990 than the real-life 1977 did.

Greatorex does a superb job in these scripts of slowly dropping in background details through dialogue. It demonstrates not a nightmare society so much as the beginnings of one. Convicted felons are given the choice between long prison sentences or short ones supplemented with 'misery pills'. Successful public service can be rewarded with 'happiness pills'. It's a future Britain that is not actively drugging the population so much as giving them the opportunity to drug themselves.

With the economy recovering from a collapse and food and power rationing widespread, many citizens desperately wish to leave for other countries. We discovered in the first episode that the government is blocking most of these requests. This second episode shows the government eliminating the problem by simply removing the appeals process altogether. After all, you cannot complain if the government removes your ability to do so. It is bleak stuff, and only seems more relevant today compared to when it was made.

The episode also eases away from the full dystopic treatment by showing off the tensions inside the Department of Public Control. Herbert Skardon (Robert Lang) may control the DPC, but he is facing an internal power play by his deputy Delly Lomas (Barbara Kellerman) - and she in turn is being undermined by Henry Tasker (Clifton Jones). Dark future governments are most often portrayed as faceless and impenetrable. The DPC is an immediately recognisable fractious mess of over-paid civil servants and pointless internal bickering. It really helps to make this series stand out.

Barbara Kellerman does a great job playing Delly, and her unusual relationship with Kyle is one of the key elements of the series so far. They dine together, they flirt, they tease each other in romantic and sexual ways. Kyle has a wife and child, although thus far they've been absent from the screen, so this edgy flirtation with an affair has a distasteful angle to it. There is also the issue that while each of them may be deeply personable to the other, they are still on opposite sides. One would assume each is solely using the other for their own benefit, however by the end of this episode Kyle has damaging information on Delly that could advance his own cause. He does not use it, suggesting there's more to this relationship that personal benefit and politics. It's fascinating.

Two episodes in, and the strong quality of 1990 is just making it all the more frustrating that the BBC has never released it to home video.

I am reviewing 1990 via a set of low quality videos somebody has uploaded to Youtube. The series remains unavailable on home video anywhere in the world - it is pretty much the last BBC science fiction series to be in this position.
Posted by Grant at 11:02 PM