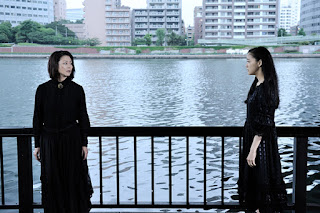 It is 8 January 2012, and time for the first episode of Penance.

Five girls are playing together. One is drawn away from the group by a strange man, and is assaulted and murdered. When her four friends cannot remember what the man looked like, the dead girl's grieving mother (Kyoko Koizumi) promises that all of them will be forced to face a penance. Fifteen years later one of the friends, Sae (Yu Aoi), encounters the grieving mother again - the time has come for her penance to begin.

Penance was originally a novel by Kanae Minato, whose other book Confessions was turned into a particularly bleak and relentless film drama in 2010. Penance was adapted not into a film but rather a five-part television series, one directed by acclaimed filmmaker Kiyoshi Kurosawa. Internationally the series was distributed as a pair of feature films, but I have decided to give it a watch in its original television format.

Kurosawa is a perfect choice to adapt Minato's novel to the screen. His films, which include the likes of Cure, Pulse and Retribution, often have a calm, subtle quality to them that makes them eerily effective and quite unsettling. He brings that tone to bear to great effect in Penance's first episode, "The French Doll".

The episode begins with the five girls meeting in a classroom, before all going together to the house of new student Emili. French dolls are going missing from houses around the town. Later, when playing with a volleyball in the playground, the girls are approached by a man - we never see his face - who asks for one of them to help him fixing an air conditioner in the school gymnasium. Emili volunteers to go, and the next time her friends see her it's once she is dead, face-down on the gymnasium floor.

At 23, Sae is deeply disturbed by her experience in the fourth grade. She has never started menstruating, something she blames on the day Emili died. She feels she has never become an adult. Too withdrawn to chase romance on her own, she ultimately has a suitor foisted upon her - the wealthy Takahiro (Mirai Moriyama), who is immediately keen not only to date her but marry her as well. There is immediately something off-kilter about Takahiro, and before long he admits he was the doll thief in her home town, that he has fantasised about her since they were children, and he is now intent on making her the life-size French doll he has always wanted.

It is a really odd story, one that regularly gets quite threatening and tense but which constantly refuses to break that tension with any outbursts of violence. The characters are strange and impenetrable. We don't know why Takahiro is so disturbed. We don't know why Sae goes along with his controlling and unpleasant behaviour. Midway through the episode Emili's mother turns up, and her presence is both oddly surreal and enormously threatening. I think it is fair to say the story - this first portion of it at any rate - does not make a huge amount of logical sense, but it seems to make an emotional sense. I found myself somewhat torn between finding it all a bit silly and finding it very effective. I will certainly be watching the second episode.

Yu Aoi delivers a wounded, brittle performance as Sae. Kyoko Koizumi, who re-teams with Kurosawa here after their excellent collaboration on his film Tokyo Sonata, has a magnetic presence as Emili's mother  Asako. As a grieving mother she immediately gets our sympathy, but the cold, unforgiving way in which she blames her daughter's four friends for failing to properly describe Emili's murderer makes her a fairly monstrous person. The contrast is what makes her so immediately interesting.

There are three more friends to serve their penance after "The French Doll", but four more episodes to go. I am particularly keen to see if these events all tie together in the fifth and final episode.
Posted by Grant at 11:02 PM