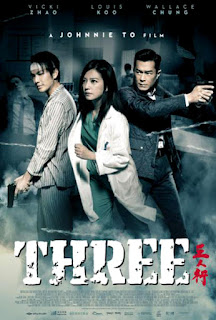 Dr Tong Qian (Zhao Wei) is an overworked neurosurgeon struggling to compose herself after a surgery goes terribly wrong. Before she can leave the hospital, the police bring in the violent gangster Shun (Wallace Chung). He has been shot in the head, but miraculously remains alive and conscious. Tong wants to operate immediately to save Shun's life. Police Inspector Chan (Louis Koo) wants to interrogate Shun first. Shun bizarrely refuses medical treatment, and instead seems set on escape - but how?

Three is the latest crime thriller from Hong Kong's masterful director Johnnie To. It is set entirely inside a hospital ward, although we hear of plot developments occurring outside throughout the film. It primarily follows three key characters - a surgeon, a criminal, and a police officer - as their lives cross over and interrelate. Everything in the film builds to a noisy, chaotic climax - but is the build-up any good, and is that climax worth the wait?

It must be said that as far as Hong Kong action thrillers go, Three is a pretty good one. At the same time it is directed by Johnnie To, who I would personally rate as one of the two best directors working in Hong Kong today (the other being Wong Kar-Wai). Rightfully or wrongfully, I tend to hold To to a higher standard than his contemporaries. He has demonstrated over and over again how skilled he is at composing an action scene, developing an original character or scripting unexpected, actively idiosyncratic storylines. So while by general standards Three is a fairly enjoyable movie, by Johnnie To standards it is absolutely a minor work.

Its biggest problem is its screenplay. The premise is rock-solid: a notorious gangster deliberately delays his own surgery until he can be broken out of police custody by his gang. In practice it feels decidedly wobbly. To takes an incredibly long time to set up the rescue attempt, although as viewers we can see it coming from a mile away. An awful lot of the film's running time is occupied with obvious plot developments that get sign-posted in repetitive ways. One could cut a solid 15 minutes out of the film and wind up with the same result - and the film is only 87 minutes long to begin with.

It is also a little difficult to believe Shun's motives. He has not simply been injured in a police shoot-out, he has a splintered bullet that has shot right through his brain. He is going to die of cranial bleeding within hours. Escaping from the hospital in a violent rescue, all guns blazing, is still going to leave him dead by the end of the day. It is a situation that stretches credulity a little too far. Wallace Chung gives a wonderful funny and charismatic performance, but it is simply too difficult to believe in his character.

The film is on much more solid ground with its other two leads. Zhao Wei gives enormous depth and heart to Qian. She has worked herself to exhaustion in the attempt to prove herself, and it has resulted in a patient left in a vegetative state. Now, tired beyond words, she is stuck caring for a criminal despite a severely uncooperative police force looming over him. Part of the film's appeal is seeing her cross through from one side of the crisis to the other, and becoming a better person by the end.

Louis Koo is also excellent as Chan. He is a buttoned-down, tightly controlled sort of a police detective. He may have once been an excellent officer, but years of hunting down violent criminals has visibly robbed him of his ethics and humanity. As the film develops it becomes clear that it was no accident that Shun was shot in the head, and Chan's actions soon become less about tracking down Shun's accomplices and more about making sure a police internal investigation does not expose his own criminal behaviour. There's an appalling violence to Chan that sits just underneath the surface. In one scene he grows so angry with Qian's interference that he strikes her across the face not once but four times. It renders him an entirely unsympathetic character.

Many of the standard elements of Johnnie To's action thrillers are in evidence. Lam Suet appears, as he nearly always does, once again playing a fairly incompetent policeman nicknamed "Fatty". The thought has occurred to me more than once that he might actually be playing the same character in every Johnnie To action film, since he appears so often. Similarly there is an elaborately staged and balletic shoot-out during the climax. It is so gleefully over-the-top that it's difficult not to laugh out loud, indeed I suspect that may partly be To's intention. One of his greatest talents as a director is the manner in which he can combine serious drama and vaguely surreal comedy in the same film. Three follows in this fashion, although the screenplay does tend to make both sides of the story a little stereotypical and exaggerated.

Three is not a complete disaster, but it is something of a mess. If you are a pre-existing fan of Johnnie To it is likely you will watch the film regardless of other people's opinions. If you have not seen one of his films before, be aware this is not greatly representative of what he is capable of directing. For that it is much more worthwhile tracking down his Election duology, or Throw Down, or Exiled. This film ultimately feels like a great director having a bit of a bad day.
Posted by Grant at 5:02 PM