Star Trek: The Next Generation: "The Game" 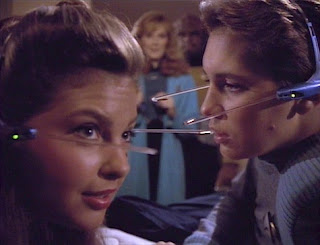 It is 28 October 1991, and time for another episode of Star Trek: The Next Generation.

Wil Wheaton returns to The Next Generation for a guest appearance, almost exactly a year after he exited the series as a regular member of the cast. It is actually a welcome return. Since this has been his only episode in the past 12 months he is actually given agency, intelligence and a stronger sense of purpose. The writing of Wesley in this episode demonstrates very clearly that it was never the character nor Wil Wheaton's performance that made the character so disliked by many Star Trek fans: it was the sloppy, disinterested writing. I am an unashamed Wesley Crusher fan, and as a character he is working brilliantly here.

He is back after a year at Starfleet Academy. He is a little older, a little more mature, and little more certain of himself. He is quick to start romancing Robin Lefler, an ensign in the ship's engineering team. This is Lefler's second and final episode in the series, after a 'blink and you'll miss it' debut back in "Darmok". She is not as well written a character as Wesley, with one of those irritating character works that you only see on TV: in this case, she adapts every life lesson she learns into a self-proclaimed rule and writes them into a book. She is saved to a large degree by Ashley Judd's charismatic, confident performance. Judd's talents would subsequently take her quite far as a major Hollywood star. Wesley and Robin's brief romance here is rather sweet

Sadly the protagonists are working well in what is an oddly superficial and shaky episode. Riker hooks up on the planet Risa - and it is a truly cringeworthy scene - and comes back to the Enterprise with an addictive virtual reality game that you play with a sort of wire headset. Every level one completes leads to a sudden rush of pleasure to the brain. He convinces Troi (Marina Sirtis) to try it, and then La Forge (LeVar Burton), and before long the entire crew is hooked on playing it - and subsequently falling under control of an unnamed alien criminal. It is less Star Trek and more Scooby Doo, with our intrepid young leads having to fight to escape the mind-controlled grown-ups. There is no depth here, and the simplicity winds up hurting the episode pretty badly.

There are a few really unexpected gems in the episode. As Counselor Troi, Marina Sirtis gets to deliver the most weirdly epic and heartfelt ode to the joys of a chocolate fudge sundae. Wesley and Picard (Patrick Stewart) get to share a pleasant afternoon tea. Even with Wesley and Robin's nice chemistry, there still is not enough here to save the episode from its core storyline. It's fairly silly and difficult to treat seriously. On top of that, thanks to this episode we've now all seen Commander Riker's "O" face - I cannot stress how much we never needed to know what that looked like.

Six episodes into Season 5 and there have been four good episodes - this was not one of them. The quality ratio slips to 67 per cent.
Posted by Grant at 7:16 AM