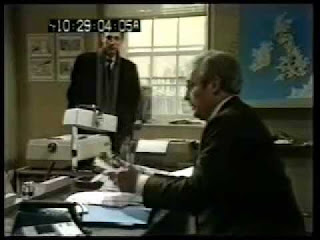 In the year 1990 the United Kingdom is slowly recovering from a total economic collapse. All commerce and industry has been nationalised. Emigrations is strictly controlled by the government. A special Department of Public Control attempts to keep the oppressed British population in line. Within this dystopian environment journalist Jim Kyle (Edward Woodward) fights to hold the government to account while secretly helping to smuggle people out of the country.

The BBC has been making science fiction television for almost 80 years now, and with the explosion of popularity of home video in the past 20 years it seems like every available science fiction series or TV play the BBC ever made has been publicly released in one format or another. That is not entirely true though, since there obstinately remain one or two productions that seem trapped indefinitely in the broadcaster's archives. One of these is the 1954 TV play of George Orwell's Nineteen Eighty-Four. By an odd coincidence, one of the others is Wilfred Greatorex's near-future drama 1990 - a series he dubbed in the press "1984 plus six".

While the series has never received a home video release, some enterprising individual has managed to get copies of its 16 episodes out of the BBC archives because all 16 have been freely available on Youtube for some time. Perhaps the BBC never noticed. Perhaps they do not care. Either way, they are available at the time of writing and since there is literally no legitimate method of purchasing them anywhere in the world it does not seem too bad a thing to watch them. Certainly from this first episode I will be ordering the DVD edition as soon as the BBC makes it available.

The series is very much of its time. It was produced during a Labour administration under Prime Minister Jim Callaghan, during which time the United Kingdom struggled with double-digit inflation, labour strikes running out of control, and widespread and growing unemployment. 1990 feels like an extrapolation of current political events to a nightmarish extreme. There is an extent to which it almost feels like a paid political advertisement by the Conservative Party: vote for Labour again and this is what you will get.

Thankfully this first episode at least moves well beyond simple political parity. Greatorex's England of 1990 seems remarkably similar to East Germany. The government controls pretty much everything. Press freedoms are being gradually curtailed: there only only a handful of independent newspapers left, and they have all been bugged. It is next-to-impossible to emigrate, and as a result a sort of' 'underground railroad' has emerged to smuggle people out of the country.

Jim Kyle (Woodward) turns out to be one of these smugglers, working it as a sideline to his day job as an anti-government journalist. This first episode splits its focus very effectively between Kyle, who is getting assistance from a government insider, and Dr Vickers (Donald Gee), a skilled medical doctor attempting to escape to the USA.

What makes the episode work so well is how relaxed and understated it is. This is not a dystopia like Nineteen Eighty-Four. It is more subtle than that. There are still some freedoms. Kyle plays a regular dance around his articles with a government propagandist with whom he flirts mercilessly (it is implied they do a lot more than that too). Edward Woodward plays Kyle with a lot of ease and charm too, while Donald Gee plays Vickers with a wound-up intensity that contrasts with Kyle very nicely.

This is a really enjoyable hour of television, and it is a deep shame that for whatever reason 1990 has never received a proper home video release. It deserves a wider audience. It deserves to be better remembered.
Posted by Grant at 5:04 PM