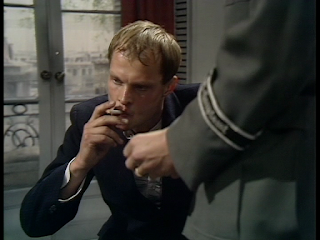 It is 2 November 1972 and time for the third episode of Colditz.

Episode one of Colditz introduced an army officer en route to the titular castle prison. Episode two introduced an air force officer. It is only logical, then, that the third would introduce a naval lieutenant to finish off the set.

Lieutenant Player (Christopher Neame) washes ashore along the French coast after his submarine is torpedoed. He escapes from a prison hospital quickly enough, and his excellent German allows him to bluff his way almost to the point of freedom. Then he is recaptured. He has stolen German ID papers, which lead the Gestapo to assume he is a German defector. When he insists he is a British officer, but lacks the documents to prove it, he is accused of being a spy.

Something really enjoyable these first three episodes is how distinctly different they are. The first, introducing Captain Pat Grant (Edward Hardwicke), was a fairly run-of-the-mill prison escape story. The second, introducing Flight Lieutenant Simon Carter (David McCallum), was a stripped-back chase thriller. The third, featuring Christopher Neame as naval Lieutenant Dick Player, operates mostly as a Kafka-esque nightmare in which the protagonist seems likely to be executed not because he is an enemy combatant but because his does not have the proper paperwork.

What's particularly effective is that you can see how the situation got into the position that it did. Player was off-shift when his submarine was hit, and thus was not wearing his full uniform. After a day in the water his identity papers were completely ruined. After spending a childhood in Germany his German is flawless. He has stolen German identification to help him avoid any questioning patrols. The result, once he is captured by a passing patrol, is that he is a man with German identity papers attempting to illegally leave France, who can speak German and English interchangeably, and has no ID or uniform to prove he is a British officer. The Geneva Convention ensures his safety, but only if he is a soldier. If he is a spy, he can be shot. It is a beautiful developed quandary.

Christopher Neame plays it all very well. There's a growing desperation in his eyes that rarely breaks out across his face. Most of the time he simply plays his cards very close to his chest, refusing to confirm any additional information to his interrogators that might leak anything of strategic value. It is some of the best work I have seen Neame do - he is one of those actors who has cropped up an awful lot in British and American television.

Late in the episode Player is reunited with Paul Von Essinger (John Quentin), a childhood friend turned rich socialite. Essinger is called in to identify Player and confirm his story, but uses the meeting as an excuse to take him out to dinner and attempt to convert him to an anti-Nazi German cause. John Quentin delivers a strangely wonderful performance, that gives the entire second half of the episode an unexpectedly homo-erotic edge. I have no idea if it was intentional or not: I am guessing it was the former, but either way Neame and Quentin create a very strong sense of history between the two men in a very short number of scenes.

At the episode's conclusion Player is delivered to the German prison Oflag IV-C, otherwise known as Colditz Castle. He is introduced to our other two leads. It seems as if all of the pieces are properly in place at last and, with Colditz finally here, the series can begin making its various escape attempts.

I think this was the best episode of the series so far.
Posted by Grant at 4:59 PM