Roadies: "What Would Phil Do?" 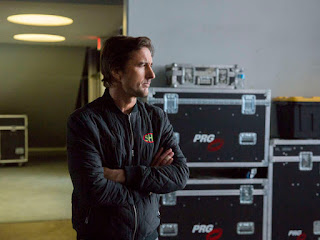 As Reg (Rafe Spall) makes budget cuts on the tour and fires multiple members of the road crew, team morale drops to a new low. Despite coming back to work Kelly Ann (Imogen Poots) finds her colleagues are not so quick to forgive her. In Phil's absence Bill (Luke Wilson) suffers a crisis of confidence in doing his job.

There is clearly something worthwhile in Roadies, because despite the first episode being jarringly awful I have found myself back watching the second episode. It is almost as bad, although to its credit it is a little more grounded and believable. I think this may be what I have seen others refer to as 'car crash television': it's awful, yet for some reason it's impossible turn away from the carnage on screen.

Part of the problem is that half of the characters appear to be annoyingly 'quirky'. Milo (Peter Cambor) is irritating; he is an American guitar technician who affects an English accent for no discernible reason. Phil (Ron White) is a loud and tedious cliche, although thankfully he only turns up very briefly this week to talk up the Taylor Swift tour he has joined. This makes two weeks in a row that the series has made weirdly ambivalent references to Taylor Swift. It is difficult to work out whether the production actually likes Swift or is vaguely mocking her. Christopher House (Tanc Sade) features prominently this episode: he is one of the two main members of the Staten-House Band, for whom the roadies work, and he feels like a weak stereotype of the self-involved, egotistical rock musician.

There are some upsides. The series continues to be driven by Imogen Poots as Kelly Ann. Her character seems the most authentic and enjoyable to watch. Colson Baker (aka rapper Machine Gun Kelly) is also solid as her brother Jesse. He exists mainly for comedy bits, but they're reasonably funny bits. There is also a lot of potential to Donna (Keisha Castle-Hughes) and Reg (Rafe Spall). At the moment it is being driven by the actors more than their material, but there is potential there that I hope future episodes will fulfil.

To be honest I think there are real problems with the series' two leads, Bill (Luke Wilson) and Shelli (Carla Gugino). They both strike me as particularly bland characters, lacking in any significant emotional hooks upon which the audience can hang their attention. I like both actors, but here they feel as if they're struggling quite badly. They look as if they are struggling to engage emotionally with their characters - I know how they feel, since I think the audience is likely struggling as well.

In the end it is all soaked liberally in some sort of faux mystique about working backstage at a rock concert. Every character seems to be in awe of what they do, as if it is some form of transcendent experience. In my experience roadies generally just get to work. It is this sort of pretence that can torpedo a TV drama, much as it did to Aaron Sorkin's Studio 60 on the Sunset Strip - to which I compared Roadies when I reviewed the series premiere.

There is good stuff buried in here, so I do not think the series is beyond fixing, but I do think a lot of fixing needs to be done. At the moment it remains one of those appalling combinations of smug self-satisfaction and weak writing. The creatives behind the scenes really need to up their game - and fast.
Posted by Grant at 5:01 PM