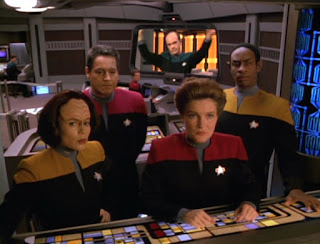 It is 13 February 1995, and time for another episode of Star Trek: Voyager.

With Voyager running desperately low on energy supplies, Captain Janeway (Kate Mulgrew) directs it towards a nearby nebula that may provide the raw materials the crew needs. Once inside the nebula, however, the ship comes under mysterious attack. After managing to escape, the crew discover it was not a nebula at all but a massive alien organism - and Voyager's activity has left it badly injured.

"The Cloud" is a generally enjoyable mixture of character vignettes and big-concept science fiction, marred only by a few scenes and elements. While it is very far from perfect, it is pretty much the best episode the series has managed since its premiere. To be honest that is a bit of a worry: this is the fifth episode of the series so far, and while sister series Deep Space Nine was pushing forward on its generally excellent third season it is odd to see that Voyager was floundering so badly out of the gate.

The idea of a massive alien creature so large and unlike a traditional life form that Voyager's crew confuse it for a nebula is a really good one, although it is also a difficult concept to make interesting on-screen. This episode does a fairly good job, pretty much by not devoting too much time to it. It is, after all, a fairly simple story: Voyager goes in, does damage, gets out, and goes back in to repair the injury it caused. It is a wonderfully Star Trek sort of a premise, even if the visual effects presented are a little on the 'cheap and cheerful' side.

This comparatively brief A-plot leaves an awful lot of time aside for subplots. It is not time wasted: writers Brannon Braga, Michael Piller and Tom Szollosi devote it to further establishing the relationships between the lead characters. How these scenes go varies considerably from character to character. While Neelix (Ethan Phillips) continues to be a relatively irritating character, veering from being annoyingly upbeat to turning jealous and defensive, the episode does a great job of showing an actual romantic relationship between him and Kes (Jennifer Lien). I feel earlier episodes did not showcase that element at all, so it's nice to see a genuine romantic affection between them.

Chakotay (Robert Beltran) offers to help Janeway discover her spirit guide, according to his Native American beliefs. The episode feels like it is on much shakier ground here, with Janeway seeming to treat the experience as a fun sort of cultural tourism rather than a significant spiritual ritual. On the one hand it is commendable that Voyager includes a Native American character, but it is also slightly problematic that they cast a Mexican American actor in the role. The series utilised a paid advisor on Chakotay's character, but it all still feels somewhat trite; not enough to offend, but certainly enough to raise eyebrows.

Tom Paris (Robert Duncan McNeill) introduces Harry Kim (Garrett Wang) to his own personal holodeck adventure: a French bistro populated with over-sexed, seductive women and strange middle-aged gangster-types. Star Trek always struggles with these holodeck scenes, because the scenarios they present more often than not turn out like this: weirdly clumsy and slightly irritating. The scenes do a pretty solid job of making Paris come across as fairly sex-obsessed and sleazy, although I am not sure if that was entirely the aim. It makes me wonder just how often Paris sneaks down to the holodeck to have sex in there. That in turn makes me wonder just what the professional courtesy of this kind of behaviour entails, and how the holodeck gets cleaned once the holographic images are turned off. Kim's awkward rebuffs of Paris' holographic creations are much more endearing. He has developed into quite a nice character: idealistic, naive, and generally out of his depth.

There is a weird disconnect in this episode between scenes of Paris freely using the holodeck and scenes of Janeway and Torres (Roxann Biggs-Dawson) stressing over how little power Voyager has to spare. They're down to the point where no one is allowed to use replicators for food and must rely on whatever weird stews Neelix makes in the mess hall. It seems odd that Paris is able to extensively use the holodeck - all of that solid light must draw some power - while everything else is getting scaled back with such urgency.

"The Cloud" is far from perfect, but does contain a positive enough mixture of good among the bad to be a watchable hour. It is the second enjoyable episode out of five, bringing the quality ratio back up to 40 per cent.
Posted by Grant at 9:00 AM