Star Trek: The Next Generation: "Violations" 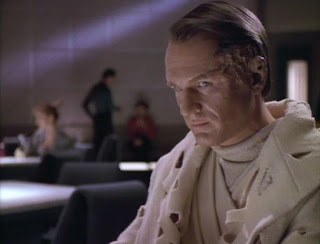 It is 3 February 1992, and time for another episode of Star Trek: The Next Generation.

The Enterprise is hosting three representatives of the Ullians, whose telepathic gifts enable them to draw out and revive long-forgotten memories from people's minds. When Troi (Marina Sirtis) comes under a fierce psychic attack, and falls into a coma, it becomes clear that one of the Ullians is a dangerous predator.

With "Violations" The Next Generation attempts to tackle the issue of sexual assault through the obfuscating lens of science fiction. It is certainly a provocative choice to make, and it seems that as soon as the choice was made it was fiercely back-pedalled into all that was left was a fairly trite and superficial handling of the issue tied in with some genuinely odd story choices. This is a bad episode, but it is worth unpacking why it is so bad.

First of all, it soft-balls the effect that the assaults have on Troi, as well as subsequent victims Riker (Jonathan Frakes) and Crusher (Gates McFadden). There is an awful lot of 'oh, what happened, it was all a blur' going on when Troi wakes, as if the episode does not want to show that the attacks were traumatic or deeply upsetting. By the episode's end there are promises of Troi, Riker and Crusher receiving help from the Ullians to recover, but no actual long-term effects are shown. That is a big problem: by failing to show that personal assaults have real and lengthy negative effects on victims, the episode effectively destroys any chance it had of dealing with sexual assault analogues in a productive and challenging fashion. By the end the link is so weak that the teleplay resorts to characters actively calling what happened to each of the officers a rape, as if the parallels were too weak for the audience to make that link by themselves.

The episode also undertakes a weird process where the characters all run through the motions of trying to determine how Troi fell into a coma, and whether any of the Ullians were involved, despite the audience knowing from the beginning that it is the visibly creepy and untrustworthy Jev (Ben Lemon, pictured above). It robs the episode of any sense of suspense, and instead we all sit around drumming our fingers waiting for the cast to catch up with their own story.

Without any real suspense, and without any real in-depth analysis of character, "Violations" winds up with nothing left with which to work. It is an oddly empty exercise. It runs through some motions, but it carries no weight. It dares to tackle a serious real-world issue and then runs from the necessary steps such an issue requires. It really is a remarkably bizarre failure. It leaves Season 5 with eight good episodes out of 12, and a quality ratio of 67 per cent.
Posted by Grant at 7:23 AM