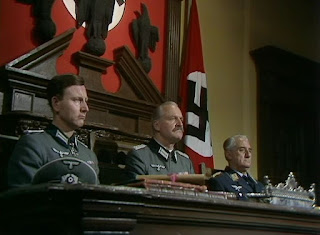 It is 28 December 1972, and time for another episode of Colditz.

The prison receives a new German medical officer, a stern disciplinarian who insists all prisoner salute him as he passes. When Carter (David McCallum) repeatedly obeys this order, the doctor has him arrested and subjected to a court martial. The escape committee think the trial may prove to create a valuable escape opportunity, but when Carter appears set to be sentenced to death priorities are changed in an instant.

"Court Martial" is the first episode of Colditz to simply feel like just another episode. While the cast do a solid job, the story simply does not seem as gripping or original as the previous ones. Perhaps it is simply that the episode has followed a particularly strong one ("Tweedledum"). Perhaps it simply is not as good as the others. While I am open the possibility of the former, I really do think it is the latter: "Court Martial" is simply not that interesting.

The episode is not a complete write-off. It does provide the opportunity for McCallum and Robert Wagner (as Flight Lieutenant Carrington) to share a bunch of scenes and to continue developing the friendship that they have struck up over the course of the season. One scene is particularly entertaining, as the pair discuss an escape attempt in front of an armed guard entirely by using baseball metaphors. The comic timing is spot on and the dialogue is clever. McCallum is also very good when he realises he may actually be executed: the look of shock turns to dread, and then into a carefully controlled panic.

Sadly things simply are not as strong elsewhere. The new medical officer, Dr Starb, is not particularly believable nor that interesting to watch. There is also an issue of believability. While I can imagine a new doctor at the prison chafing against ill discipline among the prisoners, I cannot imagine him somehow getting a British officer charged again the wishes of the Kommandant (Bernard Hepton). The entire trial seems slightly unbelievable as well.

This is an episode that does not appear to have been based on historical events, or if it was it has not been widely reported that it was. It feels like the first time the series has produced a very standard and ordinary sort of TV drama, without the realism and surprising accuracy of the other 10 episodes. Hopefully it is a temporary aberration: this has been the only episode of Colditz so far that I have not particularly liked.
Posted by Grant at 11:03 PM