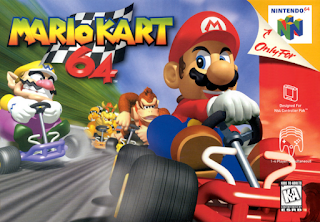 Mario Kart 64 was one of the key early titles for the Nintendo 64. It was released in late 1996 in Japan, and in the first half in 1997 in the rest of the world. It was a huge hit for Nintendo, shifting almost 10 million copies and becoming the console's second highest-selling game after Super Mario 64. I strongly suspect it was responsible for selling a lot of consoles by itself: it is a capable game for a solo player, but it came into its own with played with friends.

The game was a sequel to Nintendo's hit 1992 game Super Mario Kart, which was an equally popular hit for the Super Nintendo console. It took the various characters from the Super Mario Bros franchise and threw them into a go-kart racing game. The power-ups of the Mario platformers were retained, enabled the players to shoot turtle shells at each others' vehicle, get speed boosts, or invisibility, and so on. The racing tracks were partly based on the designs of various Mario worlds and levels.

Mario Kart 64 was an iterative improvement rather than a massive reworking of the concept. The graphics, obviously, were improved. While the original game essentially faked its 3D courses, the sequel's improved graphics allowed for fully rendered tracks with hills and valleys. Eight playable characters were available, broken up into three different types of vehicle balance (power versus acceleration, basically).

As a single-player game Mario Kart 64 struggled a little, since rubber-band AI meant that it was never entirely possible to get too far ahead or behind of the competing characters. It effectively reduced the sense of achievement gained by winning. If the best games were easy to pick up but difficult to master, Mario Kart 64 got things half-right. It was certainly easy to pick up.

As a multi-player title, on the other hand, Mario Kart 64 came into its own. It was a stunning party game, increasing the number of simultaneously players from two to four and creating a wonderful social experience. The greatest strength of the Nintendo 64 as a console - compared to the Sony PlayStation or the Sega Saturn that competed with it - was its four controller ports. It turned videogames from something one or two people did to something a whole group could play. Races in Mario Kart 64 could easily get very competitive. Once the various shell power-ups were introduced it could become actively vindictive.

The Mario Kart franchise has continued, of course, and to be completely honest Mario Kart 64 might be the least well-realised iteration of the franchise. On its own console, however, it's an absolute must-have and remains enormous fun as a multi-player game.
Posted by Grant at 7:17 AM