Indiana Jones and the Last Crusade (1989) 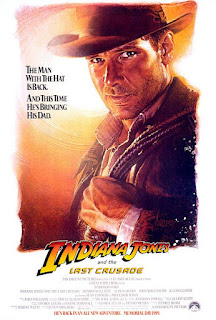 So last week my father died. It was a fairly long time coming, and Dad prepared us all incredibly well - much more than I would have anticipated a week earlier. Despite that it was, and still is, a terrible shock. When something dreadful happens my viewing habits tend to retreat towards comfortable territory: films I have seen many times before, ones where I can talk over the action to discuss particular shots, or lines of dialogue. Last week one of the films I homed in on very rapidly was Steven Spielberg's 1989 sequel Indiana Jones and the Last Crusade. It was only while watching the film that I realised I had unconsciously gravitated to a film about the relationship between a son and his father.

This third film in the Indiana Jones series sees the titular archaeologist (Harrison Ford) sent on an episodic chase across Europe and the Middle East to rescue his father Dr Henry Jones (Sean Connery) and to prevent the Nazis from obtaining the Holy Grail - the specific cup that caught the blood of Christ upon the cross. I am going to be immediately upfront and say that this is my favourite of the four Indiana Jones films. I do not think it is necessarily the best - that remains 1981's Raiders of the Lost Ark - but The Last Crusade continues to have a strong effect on me. It is a film to which I can return over and over again and never tire of watching it.

One of the most immediately noticeable aspects of The Last Crusade is the manner in which it retreats to safe territory. After Raiders of the Lost Ark was a massive critical and commercial hit, its 1984 sequel Indiana Jones and the Temple of Doom was a dark and often-times horrific prequel. While it was a profitable film, the zeitgeist did not embrace it to anywhere near the same degree. The Last Crusade hews much more closely to the original film, with similar plot beats, familiar action sequences and returning characters. Whereas The Temple of Doom spent half of the film getting to the titular location, and the second half escaping from it - a structure re-used by Spielberg in Jurassic Park - both Raiders and The Last Crusade break up the film's running time to an episodic string of chases and punch-ups, and a race against Nazi Germany.

They are all wonderfully entertaining episodes. The film begins with a mini-adventure starring a teenage Indiana Jones (River Phoenix), showing off one by one how he acquired his famous hat, bullwhip and even Harrison Ford's chin scar. Phoenix does an outstanding job of copying Ford's own mannerisms, particularly when you notice how little alike the two actors look.

Twenty-four years later and a grown Indy is sent to Venice on the trail of his father, who was hired to find the Holy Grail by American millionaire Walter Donovan (English actor Julian Glover, in a dignified performance hampered slightly by a wobbly American accent). In Venice Indy is joined by archaeologist Dr Elsa Schneider (Irish actress Alison Doody, boasting a much more solid Austrian accent). From Venice Indy heads to a castle on the Austrian-German border to rescue his father, at which point Elsa is revealed to be a Nazi traitor and her traditional female sidekick role gets appropriated by Henry Jones Sr.

It is a remarkable twist, because not only does it subvert the expectations of the audience - she starts off in the same narrative role as her predecessors Marion and Willie in the other two films - it throws Indiana Jones into an entirely new character dynamic for the remainder of the film. We are used to seeing him flirt and squabble with a love interest while rescuing her from danger. Suddenly he is getting frustrated as his inexperienced professorial father while simultaneously coping with near-constant paternal disapproval. The power dynamics are completely up-ended, and it is glorious to watch.

It is this father-son dynamic that makes The Last Crusade the richest of the four Indiana Jones films for me. The other three films are fast-paced but relatively superficial adventure stories, focused on running from set piece to set piece in the hunt for some ancient artefact. In The Last Crusade this hunt ultimately becomes secondary to a father and son finally coming to terms with one another and healing life-long wounds. Harrison Ford is fantastic as Indy: it is his signature role after all, and he faultlessly brings him to life. In many respects it is an enormously underrated performance across all four films. He makes it all look so relaxed and easy, when if you pay attention there is outstanding work going on at the same time. There is a wonderfully frantic aspect to Indiana Jones: while James Bond might sail through an action sequence pausing only to make a wry quip and to straighten his tie, Indiana Jones runs screaming through the same sort of sequence barely surviving and with his jacket on fire. Nobody thinks that they could be Bond, whereas Jones is a hero that we the audience might aspire to become.

And speaking of Bond, of course, there is no one better suited to play Jones' father than Bond himself: Sean Connery is marvellous as Dr Henry Jones Sr. He treads a very clever line, presenting himself as a crotchety and somewhat sheltered academic, but regularly allowing the evidence of a much more active, younger man underneath. You can see where one fathered the other, and the charisma between Connery and Ford turns them into one of the best on-screen double acts I have ever seen. They are wonderful to watch.

What the film gains in emotion and depth, however, it loses in iconic visuals. Everybody remembers the key imagery of the first two Indiana Jones films: the boulder, the melting face, the temple full of snakes, the man getting his heart pulled out, the mine cart chase, and the collapsing rope bridge. While The Last Crusade boasts great action scenes, they simply do not elicit the same instant recognition as the ones in those earlier films. The best action sequence of the lot is a lengthy tank-versus-horse chase scene, and while in the context of the film it is marvellous as a memorable image it feels very slightly lacking.

The film also all but throws the characters of Marcus Brody (Denholm Elliot) and Sallah (John Rhys Davies) under a bus in the hunt of comic relief. Sallah is exaggerated well beyond his appearance in Raiders of the Lost Ark, and is transformed into a comical Egyptian stereotype obsessed with camels and owing his brother-in-law money. Brody, who was an intelligent curator and friend in Raiders is now a doddering incompetent. It must have come as a huge letdown for the actors, and certainly for this viewer it remains deeply disappointing.


This misstep aside, however, The Last Crusade presents itself as the work of more mature and confident filmmakers. Since The Temple of Doom Ford had performed in Witness, The Mosquito Coast and Frantic. Spielberg had directed The Color Purple and Empire of the Sun. Quite simply both director and star had moved beyond this kind of popcorn adventure. While a little bit of the classic old-fashioned action was lost, it was replaced by proper characters and a much richer sense of tone. Raiders of the Lost Ark might represent Indiana Jones at his purest and most entertaining, but The Last Crusade shows him at his most believable. It remains my personal favourite of the series: a movie about a man who rediscovers his love for his father. Last week it really helped me out.
Posted by Grant at 5:09 PM