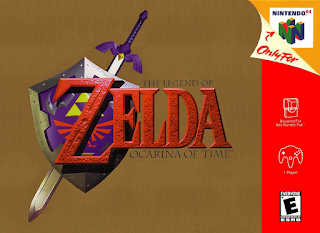 Some games are good, some are bad. Occasionally one comes along that is genuinely great, but even rarer still is the game that makes a real and lasting impact on your life. It creates fond memories of playing it, and discovering its world. It sticks in your mind for years after the fact. These are the games I treasure. They are generally either role-playing or adventure games: ones with a fictional world to explore, and characters to discover. They are games that require a significant investment of time, because they tell an actual story. They are not just fun to play, they have a real emotional effect.

There have been a bunch over the years for me. Secret of Mana. Shenmue. Red Dead Redemption. Harvest Moon. Of all of the games that have stuck with me over the years in this fashion, the best of them by a country mile is The Legend of Zelda: The Ocarina of Time.

Like Super Mario 64, The Ocarina of Time took a pre-existing Nintendo franchise and updated it for a three-dimensional playing space. For Mario this meant transforming two-dimensional platforms into a much more complex and engaging space. For Zelda it meant finally making good on the promise of the earlier titles and turning the sense of a fantasy world into a fully explorable and immersive one. It's been almost two decades since the game was released, so it would be easy to go back now and laugh at how primitive some of the graphics look. At the time it seemed revelatory. I replayed the game earlier this year, and despite the older graphics it is all presented with such integrity that it still holds together in a profoundly effective manner. While earlier games - including the four previous Zelda titles - allowed the player to unlock access to new game areas, The Ocarina of Time really felt like the player was suddenly able to explore entire new areas of a world. There was a real sense of scale and geography to the game. You did not simply play new levels - you went somewhere new.

The storyline was exceptional as well, including a time travel component that saw the playable character Link transition from childhood to young adulthood throughout the game: back and forth, seeing how events in the past would affect the future. There was a wide range of characters that one would meet in the past, and then meet again in the future, creating a score of emotionally satisfying story arcs. As with earlier Zelda sequels The Ocarina of Time did not create too much in the way of new monsters or playable weapons - it simply remixed and refined what had been done before. At the time it was the best such refinement ever - even now, with another 12 main Zelda games released, it is a firm contender for the best game in the whole franchise.

In terms of design The Ocarina of Time was hugely innovative, and many of its ideas were immediately co-opted to the point of becoming industry standards. The 3D camera mechanism, based on the version developed for Super Mario 64, was stunning and effective. The 'lock-on' system allowed the player to clearly see what they were fighting in any combat sequence. Contextual controls enabled the character to do more things without the player having to learn huge combinations of buttons. The open world - if you could see it in the distance, you could probably eventually get there - was not invented for The Ocarina of Time, but it was a massively high profile example of the potential that lay there.

This is such a remarkable game. Memories of playing it are not about 'remember when I defeated the boss monster?', but rather 'remember when I got lost inside Jabu-Jabu's belly for days?' or 'remember the first time I woke up in the future?' It didn't simply let you play a videogame - it invited you to live a fantasy adventure. It remains the only game for which I actually pre-booked a day off work in order to go home and play it. It is far and away the best videogame created for the Nintendo 64 and my favourite. It is one of the best videogames ever made.

Today is the 20th anniversary of the Nintendo 64 console, which was released in Japan on 23 June 1996. It was discontinued more than seven years later on 30 November 2003. A total of 388 games were released for the console worldwide, most of them exclusively in Japan. In the English-speaking world pickings were slimmer, as the console got pretty well hammered in the market by Sony's much more successful PlayStation console. The N64 was an odd console, however, in that it boasted a small number of games that were so good and so entertaining that it was arguably the best console of its generation solely for those games: The Legend of Zelda: The Ocarina of Time, The Legend of Zelda: Majora's Mask, Super Mario 64, Mario Kart 64, and GoldenEye 007. Just with those five games alone the Nintendo 64 was pretty outstanding value.

The full list of my 20 favourite Nintendo 64 games is available here. If a game did not appear on the list that you thought deserved a mention (a few got close, like Pokemon Snap for example), let me know in the comments. A couple - such as Animal Crossing - did not make the list simply because I have never had the opportunity to play them.
Posted by Grant at 9:15 AM