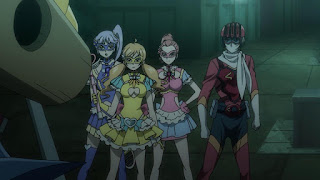 It is 28 November 2013, and time for another episode of Samurai Flamenco.

The mysterious King Torture announces he will invade Japan with a series of deadly monsters, however those monsters keep getting defeated by Samurai Flamenco and the Flamenco Girls. Hidenori begins to worry about how enthused Masayoshi has become about the conflict. Mari begins to feel jealous of how Masayoshi is dominating their monster battles.

This really has become a quite peculiar series. The first six episodes followed a clueless male model attempting to be a superhero in a mundane world. The seventh suddenly introduced a genuine monster that kills several police officers before killing itself in an explosion. I really was not sure what sort of series was going to emerge after such a weird change in tone and content. Now that I have watched the eighth episode, I am still not sure. I'm intrigued, and that does count for quite a bit.

Firstly, the monsters: they are patently ridiculous, blending animals and machinery so that Samurai Flamenco is forced to fight a half-gorilla half-guillotine, or a half-rhinoceros half-cooking pot. At the same time they seem to be genuinely dangerous, and when defeated each of them commits suicide by detonating an explosive. For the general public in Japan, they don't seem to pose a serious concern. Over the course of the episode Masayoshi faces multiple monsters, and by the end the masses have shifted from panic to disinterest. Scenes of cabinet meetings with the Japanese government are particularly funny, featuring an evasive Prime Minister that communicates in grunts and nods. It makes for a slightly strange episode - there was a sudden real danger to the series, and that danger does still seem to be there, but nobody cares.

Well, almost nobody. With his modelling and acting career taking off at the same time as his superhero life finally fulfilling his dreams, Masayoshi is on a self-interested high so great that Hidenori seems rather worried for him. While the series overall has been somewhat shaky, the relationship between its two leads have been great. It is nice to have Hidenori there: he is a calm, rational voice in the middle of an increasingly ridiculous world.

It is interesting to observe how this series, that started off mocking and interrogating tokusatsu shows, is now actively emulating them. The episode follows a pretty tight formula of Masayoshi encountering a monster, them exchanging insults and barbs, and then having a fight. It happens three times here in the space of 20 minutes. Even Mari comments by the end that it is all getting a little boring and repetitive. It is like that interrogation has continued, but rather from a fan point of view looking in - which how the series used to operate - it's now done from inside the tokusatsu tradition itself.

While the animation remains a little substandard, Samurai Flamenco is actually doing some rather unexpected and interesting things. I enjoyed this episode a lot: it marks the fifth good episode out of eight. The quality ratio rises to 63 per cent.
Posted by Grant at 5:05 PM