Roadies: "The City Whose Name Must Not Be Spoken" 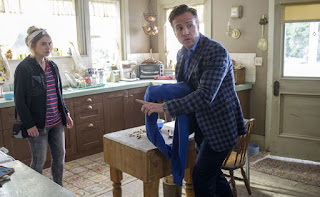 It is time for a much-needed day off for the roadies of the Staten-House Band, but when Reg (Rafe Spall) says the name of a cursed city on the tour bus everyone's day is immediately devoted to breaking the curse before it ruins the tour. Meanwhile the band's bass player goes missing, sending Bill (Luke Wilson) and Shelli (Carla Gugino) on a road trip to find him.

So this is the fourth episode of Roadies, the 2016 TV drama so weirdly awful that I simply have not been able to look away. Every week I am dragged back by its gravity of predictable characters, well-worn stereotypes, and bizarrely gargantuan smugness, just so that I can get flummoxed by how it got to be so hopelessly awful all over again. This episode is not an improvement. It is perhaps a slightly different kind of awful to earlier episodes, but awful it remains. I will be stunned if this series gets a second season.

This episode is written by comic author and musician Hannah Friedman, making what I think is her television writing debut. Sadly it's pretty terrible stuff, aiming desperately to be funny and quirky but irritating more often than it amuses. The core of the episode surrounds the road crew bonding while undertaking a crazy ritual to break Reg's curse - he named "Cincinnati" on the bus, and since that city was the site of a fatal stampede during a Who concert, amends are forced to be made. It is ridiculous, and even the characters constantly admitting it's ridiculous does not make it any more entertaining to watch.

The series has a serious problem with Reg. He is instinctively and overwhelmingly unlikeable. He is a grating, idiotic fool designed for the audience to find comically irritating - only the writing in this series constantly misfires and makes him actually unlikeable. The writing is constantly pushing him towards a romance with audience-viewpoint character Kelly-Ann (Imogen Poots), only there is zero chemistry between the two and no logical reason why she would be attracted to him at all. It is certainly not Rafe Spall's fault - he is simply a good actor trapped with an unworkable part.

Similar issues face Bill and Shelli, who again are constantly being forced together without any proper writing indicating why they should be a couple. Luke Wilson and Carla Gugino's performances do not help - they look bored, as if they're quietly damning their agents for getting them into this situation even while delivering weak banter on a highly episodic string of random encounters. None of the encounters work, or generate decent comedy. It is all a colossal misfire.

I honestly do not understand how this show came to be so bad. How did Cameron Crowe foul things up so badly? How did executive producer J.J. Abrams not recognise during development that the scripts were so poor? Why did no one at Showtime hold up a hand and ask for rewrites? This is hypnotic car crash television - there may be worse shows out there, but I swear they don't strut around with as much over-confidence as this one does.
Posted by Grant at 7:08 AM