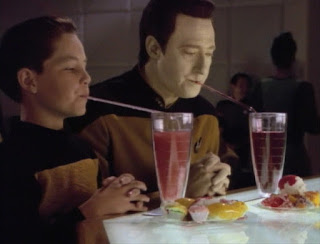 It is 27 January 1992, and time for another episode of Star Trek: The Next Generation.

The Enterprise has been sent to locate the missing Federation starship Vico. When they find it inside a mysterious 'black cluster' stellar phenomenon, it has been torn in half. There is only one survivor: a boy named Timothy, who is rescued by Commander Data (Brent Spiner). While the Enterprise crew attempt to determine why the Vico was destroyed, Timothy forms an unexpected attachment to Data.

It is an odd bit of scheduling for The Next Generation to bunch together two episodes about children in a row. We have only just watched "New Ground", in which Worf is forced to directly care for his son Alexander. Now we have an episode in which Data is ordered to spend several days in the company of a traumatised boy in the hopes of aiding in his emotional recovery. It would have been better had a completely kind of episode been slotted in between them. As they stand, "Hero Worship" is the stronger episode of the two. It boasts a much stronger juvenile performance by Joshua Harris, as well as a more interesting science fiction subplot.

This is also another great episode for Troi (Marina Sirtis), since counselling orphaned children falls pretty much precisely into her remit. She is very much in control here, and once Timothy latches onto Data she is coaching Data in what to say to him throughout the episode. Data, by contrast, is well out of his depth caring for an upset and psychologically shattered child, but in true Data style he calmly presses on. Brent Spiner's performance is typically faultless, and he plays very well opposite Joshua Harris.

As a coping mechanism, Timothy begins to emulate Data. He claims that he too is an android, and that he does not feel emotions. It's well played by Harris, as he spends the middle section of the episode copying Brent Spiner's tics and mannerisms as Data incredibly well. It becomes a rather sweet little story in this part of the episode, with Data and Timothy forming a proper friendship. By the episode's climax, Timothy's attempts to avoid his feelings break down and he admits he thinks he is at fault for the Vico's destruction. It's a very nicely developed and sensitively played scene.

The real cause of the Vico's destruction is the black cluster in which the Enterprise found it. It is a large area of space comprised of numerous collapsed stars, creating unstable gravitational forces and other technobabble. The waves reflect back energy, so when a starship gets buffeted and activates its shields, that energy is reflected back. The stronger the shields, the harder the reflection, until a ship effectively destroys itself in the attempt to block the waves. It is a fairly simple idea, which is good: it allows much more time to be focused on the human story.

This is not an outstanding episode of The Next Generation, but it's certainly a rather good one. It is a great showcase for Brent Spiner and Marina Sirtis, and has enough depth to it to be an enjoyable watch. It provides Season 5 with its eighth good episode out of 11 so far, and increases the quality ratio to 73 per cent.
Posted by Grant at 3:45 PM