Crusade: "The Memory of War" 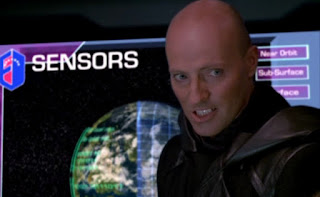 It is 11 August 1999 and time for another episode of Crusade.

Despite Galen (Peter Woodward) warning them not to investigate, the crew of the Excalibur head down to a long-dead planet in search of evidence of the Drakh plague. They are unsuccessful, and instead find the planet ravaged by a nanotech virus that turns each member of the crew into a homicidal maniac.

"The Memory of War" is a difficult episode to write about, not because it is bad - and it is - but because it is unexpectedly and remarkably boring. It is the sort of episode that sits there: its basic ideas are sound but unimaginative, the cast are talented but under-used, the script is a little tedious but far from the worst writing in the series so far. It is simply generic and dull, and wastes the viewer's time.

It is obvious that this episode was shot early in the schedule and broadcast much later: the episode treats Galen as a much more mysterious and unknowable character than other episodes have, including a ridiculously over-the-top slow motion entrance onto the Excalibur. Peter Woodward seems an engaging performer, but once again the script forces him to over-act. He plays such a plummy, smug character that it is hard for him to give the part any depth or dimension. Had the series continued, I suspected Woodward might have drawn some really good material out of Galen; sadly he never got the chance. The swapping around of the episodes is also obvious when Dr Chambers (Marjean Holden) invents a nanotech shield several weeks after the characters have already used it.

The episode is shot entirely on sets, which makes for a fairly unconvincing planet of fake trees and over-ambitious blue screen work. The episode's climax, in which Gideon (Gary Cole) and Galen combat a runaway technomage AI, looks woeful. It was possible for Babylon 5 to be shot entirely on a soundstage because the overwhelming majority of storylines took place on the space station. That isn't the case here, and the constant straining to make a set look like an outdoor environment is a chore to sit through.

At this stage there is little point in pretending Crusade is particularly good. Lucky episodes manage to scrape through with more good elements than bad, but that is a fairly shaky baseline on which to sustain a series. With years of hindsight that TNT did not have, I have to say they did the right thing in cancelling Crusade: the series simply is not well enough made to survive. Ten episodes in. Four have been good. The quality ratio slips to 40 per cent.
Posted by Grant at 5:00 PM