Crusade: "The Needs of Earth" 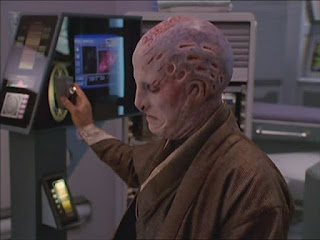 Based on intelligence gained from the Rangers, Gideon (Gary Cole) sets off to rescue an alien dissident who is on the run with his planet's most critical data. Once he finds the alien, his second challenge is to keep him safe when the alien's government comes looking for him.

"The Needs of Earth" is probably the strongest episode of Crusade so far. Due to the interference by TNT in the series' running order and content, it was scheduled here as the 11th of 13 episodes. It was actually intended to be much earlier into the run, and that's really obvious in the final episode. It would have bolstered the season's earlier episodes considerably, and while I doubt that it would have been enough to keep the audience watching it would likely have led more science fiction fans to warm to the series' potential.

So why does this episode succeed where so many others failed? Its central conceit is a great one, and very much in keeping with the sorts of stories J. Michael Straczynski told on Babylon 5. The alien fugitive, Natchok Var, claims to have the most critical bank of knowledge for his entire planet. It turns out that his planet has undergone a Khmer-Rouge style revolution, and all of the art, music and literature of his species has been rigorously destroyed in a planet-wide purge. His is the only collection left of all of the original culture of his people. It is not the medical information that Gideon is seeking, but it is undeniably priceless information. It is a clever twist, and an emotionally effective one at that. By the episode's end, and with the information safely passed on to Dr Chambers (Marjean Holden), Natchok calmly leaves with his government captors towards his certain death. It is all powerfully developed stuff, and far beyond the sorts of trite storytelling Crusade has made its stock and trade.

There is also a lot of plot packed into the episode. The second half is dominated by Natchok's mission, but the first is based around rescuing him in the first place. It is a nicely paced heist by Gideon and Dureena (Carrie Dobro), with some nice action and plenty of humour. There is also a relatively funny running joke about a data crystal accidentally loaded with alien pornography that's played just enough to get a laugh but not so much as to become tiresome.

The episode also juggles its regular cast more effectively than I am used to. Gideon and Dureena get their heist adventure, Chambers gets to dominate the second half, Matheson (Daniel Dae Kim) plays a key role during the episode's climax. Even Eilerson (Max Allen Brooks) has a brief comedy bit as the owner of the aforementioned alien pornography.

It's a shame, when a series is gearing down - only two more episodes remain after this one - that it finally slips into gear and gives the viewer something worthwhile. It is still imperfect television, but it is imperfect on a level with Babylon 5 generally and not significantly worse than it. With six good episodes out of 11, the quality ratio rises to 55 per cent.
Posted by Grant at 5:07 PM