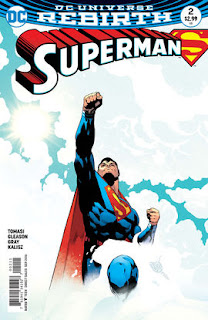 One of the best books of DC's New 52 line was Batman and Robin. The creative team of Peter Tomasi, Patrick Gleason and Mick Gray absolutely nailed the relationship between Bruce Wayne and his son Damian. It was funny, dramatic and warm, and more importantly it absolutely sold the idea of a vigilante superhero running around the city with his own son.

That same team has reunited on the DC Rebirth edition of Superman. They are telling a similar story: Clark Kent is teaching his son Jonathan how to embrace and control his superhuman powers. While that basic framework is the same, and while it is looking to be just as accomplished and entertaining a comic, the tone is very different. Superman is a much brighter character than Batman, and Jonathan Kent is vastly more upbeat that Damian Wayne. It's these differences that are really making Superman pop off the page. The relationship between father and son is just beautiful.

There's an unexpected fight here with a giant alien-looking purple squid thing, which given the Watchmen references in DC Universe Rebirth did give me pause for a moment. It's a great scene, with Superman keeping his son safe while encouraging him to properly control his heat vision for the first time. There is also the return of a former Superman villain that really makes me feel like the Rebirth Superman titles are revisiting the early 1990s with perhaps a little too much enthusiasm.

Gleason and Gray's artwork is excellent, particularly their wonderful cover. John Kalisz colours it all wonderfully too. This is a great superhero title with a fresh and entertaining angle. It's shaping up to be one of the best Rebirth books on the shelves. (4/5)

Black Manta tries to kill Aquaman for killing his father. This is an odd sort of an issue: the Black Manta/Aquaman feud is a long-running one, and for some reason Aquaman manages to persuade Manta to drop it within the space of one fist-fight and conversation. It is a bit like Superman and Lex Luthor resolving their differences: rather unbelievable, and oddly abrupt. Guest artist Scott Eaton does a pretty good job with the artwork, but the plot simply doesn't hold up well and Abnett's dialogue seems a little off and awkward this week. I've liked recent issues a lot more than this, so hopefully this issue is just an abberation. (2/5)

One thing that can be said for Tom King's run on Batman: he is nailing the characterisation of the supporting players. Both Alfred and Jim Gordon are pitch-perfect in this issue, and remarkably funny. As for Batman, he seems uncharacteristically trusting of new super-powered vigilantes Gotham and Gotham Girl. I am assuming he's holding some cards close to his chest, but it's too early to know for sure. Despite a lot of positive elements I am not warming entirely to this new run on Batman. It is difficult to put a finger on why: the artwork by David Finch doesn't quite work well enough for my tastes, and the plot is moving just a bit too slowly. (3/5)

After getting shot multiple times and dumped in the open ocean, Oliver Queen wakes to find himself presumed dead, his apartment demolished and his company entirely out of his hands. This is shaping up to be my favourite of the DC Rebirth titles. It feels as if it is taking Green Arrow back to the territory where he works best, and with a supporting cast that complements him wonderfully. Otto Schmidt's artwork is distinctive and well-matched. The storyline is shaping up quickly and in unexpected ways. This is the one book for which I am very keen to read the next issue. (4/5)
Posted by Grant at 5:05 PM