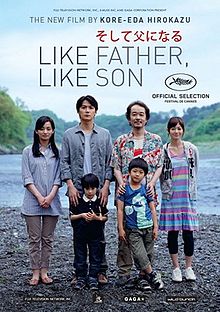 Ryota (Masaharu Fukuyama) and Midori (Machiko Ono) are a rich urban couple with a six year-old son named Keita (Keita Nonomiya). Their lives and thrown into disarray when the hospital where Keita was born contacts them with a stunning admission: there was a mix-up, and they have been caring for someone else's baby for the past six years.

Like Father Like Son is a 2013 Japanese drama from the acclaimed writer-director Hirokazu Koreeda. It presents what has to be a nightmare scenario for a parent: discovering that your child is not your child at all, and some random family in the outer suburbs has been raising your actual son as their own.

Like all good filmmakers, however, Koreeda (whose surname is sometimes translated as Kore-eda to ensure people pronounce it correctly) knows there's a difference between what a story is ostensibly about and what it is actually about. In this case, Like Father Like Son really tells the story of a man coming to the realisation that he has been a terrible father.

Fukuyama does a superb job playing Ryota, and he has a relatively difficult task. Ryota is not a particularly sympathetic character. He neglects his wife and son in favour of his work. He pressures Keita to learn classical piano, even though Keita himself has no particular interest in it nor practical talent for it. When he discovers Keita is not his biological son, he immediately asks Midori how she had never noticed. He uses Keita's newly discovered origins as a reason for why he does not excel at the piano. When he meets the opposite couple, who have been raising his biological sun Ryusei (Shogen Hwang), one of his initial reactions is to offer them money in return for taking both boys.

All of that makes it a supremely difficult task to make an audience like a character, but to a large extent I think Fukuyama succeeds. We may not like Ryota's behaviour, but we can see how he became the man he is. A brief subplot involving his own father shines much light in this regard, and it actually becomes quite tragic to see how he is repeating so many of his father's mistakes with his son. We also get to see the vulnerability in Ryota through glances and pauses made in Fukuyama's performance, as well as him slowly beginning to realise his own faults and make an attempt to correct them.

Machiko Ono is similarly stronmg as Midori, who is supportive of her husband yet clearly deeply hurt by him too. She struggles terribly with the situation. She feels like a failure as a mother because she did not realise Keita was not her own child. She struggles to get to know and embrace Ryusei, but even when she does begin to love him as a mother she feels guilty for abandoning Keita.

The opposite couple, Yukari (Yoko Maki) and Yudai (Lilly Franky), are presented very much as a contrast. Where Ryota and Midori have one child, they have several. Where Ryota has a high-paying executive job, Yudai is a small-town electrician and shopkeeper. Where Ryota and Midori are ultimately rather unhappy, despite their privilege, Yukari and Yudai seem to live a genuinely warm, happy life. Koreeda cleverly represents this difference through physicality: it's worth noticing how straight and rigid the body language of one family is, and how loose and horizontal the other's is. It is particularly clear when both families stand together for a group photograph. There is no reason the two families would ever meet, but they are thrown together by ill fortune and their interactions provide much of the film's drama.

A real highlight is the two young actors hired to play Keita and Ryusei. Koreeda draws remarkable performances out of them, particularly from Keita Nonomiya. Koreeda appears to have a real gift for directing children. His previous film I Wish (reviewed at The Angriest over here) was entirely based around juvenile performers, and he did a remarkable job of it there as well.

Like Father Like Son is a slow film, with a deliberate measured pace, which is very much in keeping with Japanese films generally. It takes what could easily be a lurid and melodramatic story and tells it in a realistic and highly subdued manner. The result is something rather special, and emphasises Koreeda's status as one of Japan's foremost contemporary filmmakers.
Posted by Grant at 5:07 PM