Star Trek: The Next Generation: "The Masterpiece Society" 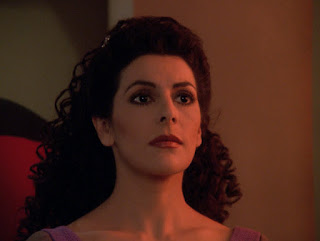 It is 10 February 1992 and time for more Star Trek: The Next Generation.

While monitoring a rogue stellar fragment, the Enterprise detects a previously unknown human colony on a planet in the fragment's path. When the crew attempt to warn the colonists of the danger, they discover a carefully orchestrated civilisation where every individual has been genetically engineered for a specific place in society. Before long the Enterprise crew's presence among the colonist causes a disruption in their society - one that might not be possible to repair.

"The Masterpiece Society" is a flawed episode rich in strong and intriguing moments. It is these moments that ultimately save it, and give it a depth that the fairly dull premise fails to provide on its own. It also gives some nice material to Troi (Marina Sirtis) and La Forge (LeVar Burton), the latter of whom has been in sore need of a decent storyline for some time.

The initial threat in the episode is that the passing stellar fragment may cause gravitational disruption that could severely damage the colony's infrastructure, and even kill off the entire population. That problem is solved relatively simply, however, and once resolved it leaves behind a much greater difficulty. The people of Moab IV have been cultivated on purpose over multiple generations to operate as a perfect and efficient society. Every individual has a job to perform, and they have been specifically bred to fulfil that purpose. As an isolationist colony, they have had no contact with the outside universe for their entire lives.

That causes the larger problem because discovering a broader universe leads to insatiable curiosity, and before long some of the colonists are keen to leave Moab IV on the Enterprise once it moves on. Allow them to leave and the remaining colony will start to collapse without its perfectly-designed and irreplaceable individual members. Force them to stay and the Enterprise crew are trampling all over their human rights. There is no easy solution, and no matter what choice Captain Picard (Patrick Stewart) makes it will end in failure. Audiences waiting for a last-minute third option will be surprised: no such escape plan exists, and the episode ends with Picard picking his choice of a lesser of two evils.

While all of this goes on, the influence the Enterprise crew has on Moab IV plays out in microcosm. Troi forms part of the initial away team and immediately hits it off with the colony's leader Aaron Conor (John Snyder). A romance soon develops and she eventually spends a night at his home. It is a relationship doomed to fail from the outset, and the pain both of them feel is palpable and well presented. There is a particularly effective scene towards the episode's end: Picard decides to beam down to Moab IV himself and speak to Conor directly. Troi accompanies him, and in the turbolift awkwardly admits her liaison with Conor. Marina Sirtis plays a beautiful combination of regret, embarrassment and shame, while Patrick Stewart keeps Picard quite supportive and sympathetic. At one point he strikingly drops his usual detached persona and calls Troi by her name rather than as 'counsellor'. It is a great moment of character.

While working out how to deflect the stellar fragment away from the planet La Forge works with one of the colonists, Hannah Bates (Dey Young). As a member of an engineered 'perfect' community, Bates has never met somebody with a disability before. It allows the series to once again showcase La Forge's blindness and how he copes with it. This sort of gentle character interaction is something that LeVar Burton seems particularly good at, and between him and Dey Young it is a well-played and interesting series of scenes. Bates also acts as an example to the viewer of a colonist wanting to leave Moab IV and explore the galaxy. She adds a face to what could easily have been an abstract reference in the script.

A surprisingly strong episode emerges out of what seems like a pretty generic storyline. Some viewers at the time suggested that the storyline represented some sort of allegory on abortion and a woman's right to choose. While I can see how they reached that conclusion I think the claim is overdrawn. This is a provocative ethical dilemma in its own right, and a great episode.

We're now 13 episodes into Season 5, and nine of them have been good or great. The quality ratio rises to 69 per cent.
Posted by Grant at 11:49 AM