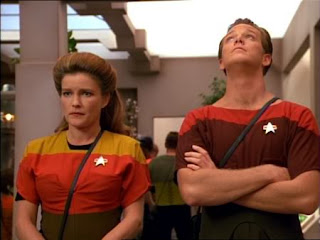 It is 30 January 1995 and time for the third episode of Star Trek: Voyager.

Voyager is caught in a shock wave that emanates from a nearby planet. The crew investigate, and discover some kind of explosion has just destroyed an entire alien civilization. Lieutenant Paris (Robert Duncan McNeill) and Captain Janeway (Kate Mulgrew) are caught by an after-effect of the explosion and thrown back two days in time - and headlong into the alien civilization that was just destroyed.

It may be worth keeping count of the number of times Voyager messes about with time travel and time paradoxes, because I seem to recall it happened quite a lot. One of the head writers of the series, Brannon Braga, seemed particularly fixated on time travel storylines. He personally wrote episodes of The Next Generation like "Timescape", "Cause and Effect" and "All Good Things", and he oversees an awful lot of time travel here. Let us put it this way: we are now three episodes into the first season of Voyager and two of those episodes have focused on time travel.

While the Voyager crew work to find a way of recovering Janeway and Paris, their captain is hiding out two days earlier arguing with Paris over whether or not they are allowed to interfere and prevent the disaster. It does provide a good opportunity to further bed down the characters' relationship, that was established pretty well in "Caretaker". That is sadly about the only part of the episode that works.

There are a lot of convenient things in this episode. For one thing it beggars belief that in a universe packed with a wide variety of bumpy-headed alien variants, Janeway and Paris arrive on a planet where the local population look exactly like human beings. They very easily find themselves mixed up with the exact underground group who seem set to cause the explosion in a terrorist act. The alien people also seem to employ one of those hilarious monocultures where every single person wears an identical stripey outfit.

Of course a plucky kid gets caught up in their affair, in a pretty unconvincing and fairly irritating fashion. The child playing the role is okay, but he has been given awful dialogue with which to work. The other guest actors do not seem to go so well, offering dull exposition in a dull fashion. Even the remainder of the regular cast flounder, delivering a lot of technical nonsense about 'subspace fractures' without being given the opportunity to emote, develop or expand their characters. It all feels remarkably awkward.

By the episode's climax it becomes clear that a device constructed in the present to rescue Janeway and Paris in the past is what actually causes the planet-destroying explosion. Janeway manages to stop it from working, at which point history resets and none of the episode ever happened. Only Kes (Jennifer Lien) remembers, thanks to her fast-growing and rather stereotypical psychic powers. If there is one thing more irritating than a generic time-travel episode of Star Trek, it is an episode where the entire story is reset at the end: not only did events have no ongoing effect on the characters, it did not actually happen at all. Since it did not happen, there's hardly a reason to watch it, now is there?

Three episodes in, and only the premiere episode has been good. The quality ratio drops to 33 per cent.
Posted by Grant at 7:48 AM