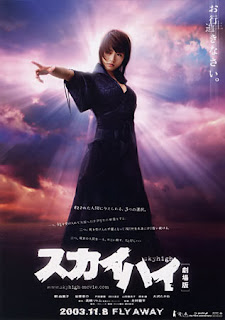 Kanzaki (Shosuke Tanihara) is a police detective investigating a string of murders in which women have had their hearts cut from their bodies. Moments before his wedding Kanzaki's own bride Mina (Yumiko Shaku) is murdered by the same mysterious killer. While Kanzaki heads off on a murderous quest for revenge, Mina's soul arrives at the mysterious "Gate of Resentment". There the Guardian gives her three choices: be reincarnated, become a ghost, or take revenge on her killer - and go to hell for eternity as a result.

Sky High is a 2003 supernaturally-themed action film directed by genre stalwart Ryuhei Kitamura. It is actually a prequel to a television series, and was produced and released into cinemas in between production of its two seasons. The series features Yumiko Shaku as Mina, the guardian of the Gate of Resentment, who would assist a different soul each episode in resolving their human affairs or solving their own murder. The film tells the story of how Mina became a guardian in the first place.

Ryuhei Kitamura has an immediately noticeable style to his films, one that heavily favours aesthetic over substance. His films - which include the likes of Versus, Azumi and Godzilla: Final Wars - are packed with angry men in leather jackets, rampant over-acting, and an awful lot of scenes of attractive young women having sword fights. It is certainly a style that works for him, and he's enjoyed a strong international cult following for a decade and a half now. Personally I find the quality of his films varies an awful lot. Sky High, which he directed between Azumi and Final Wars, is one of the lesser quality films.

There are two main problems with Sky High. The first is budgetary: this is a visibly cheap production. The sets and costumes look thrown together, and the performances all feel rather perfunctory and rushed. It is also appallingly edited: at 90 minutes this might have been a cheap and cheerful little fantasy thriller. At 120 minutes it drags interminably. The last 30 minutes or so are actually rather fun, with sword and gun fights taking place both at a temple and within the afterlife. The sword fighting is completely nonsensical, aimed more at letting the actors make stylish poses than in their characters actually attempt to kill each other.

The second problem is how the film sidelines Mina so heavily. This is clearly supposed to be her story - it's her TV series after all - but she begins the film being horrifically and garishly murdered to motivate her fiancee towards revenge. While he runs around Tokyo trying to find and kill her murderer, she spends a lot of time feeling sad at the Gates of Resentment, or watching passively as a ghost. Even in the film's climax, where it momentarily seems that Mina has developed into a pro-active character, she requires Kanzaki's help to defeat the villain. It is all a great shame, as Shaku shows a lot of potential that never gets the chance to be realised.

Kitamura has directed better films than this, and there is ultimately nothing in Sky High that is distinctive or enjoyable enough to make it worth the effort in tracking it down. This is one Japanese action film that can be safely left alone.
Posted by Grant at 11:51 PM