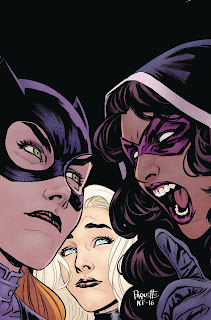 Birds of Prey was one of DC Comics' great team-up books. It kicked off with a 1995 one-shot by writer Chuck Dixon, and when that sold well DC followed it up with a miniseries and eventually an ongoing series. The book united Oracle, aka Barbara Gordon, with Black Canary and the Huntress, and via a bunch of writers - notably Gail Simone - it became one of the better superhero books on the shelves. A 2011 attempt to revive the book with a new cast of characters failed to get an audience. Now DC is trying again with a more traditional take: Barbara Gordon's back, now as Batgirl, and this prologue issue sees her teaming up once again with Black Canary and the Huntress.

While it's always great to see a good band get back together, the script by Julie and Shawna Benson feels a little too much on the nose. There is not a lot of room for subtlety, and this issue at least dwells perhaps a little too much on Alan Moore and Brian Bolland's notorious graphic novel The Killing Joke. It looms over pretty much every take on Batgirl since 1988, and it would be a relief to finally see a take on the character that moves on from her being shot in the spine by the Joker to make Batman and her father unhappy. Claire Roe's artwork does not quite meet with my expectations, but I suspect that may be more of a taste thing than a question of quality. Certainly it's quite distinctive.

This issue does feel slightly confused when it comes to continuity. It seems to mention continuity from both before and after DC's Flashpoint, creating a strange sort of Schrodinger's Huntress situation where I was unsure whether Batgirl and Black Canary knew Huntress until they finally encountered one another in the issue's final act. I suspect this may be the fault of DC's messy continuity rather than this issue in particular, and for new readers it is likely not an issue at all.

I am not sold on this new iteration of Birds of Prey, but this is just the kick-off - with any luck the series proper, which begins in two weeks, will be better. (2/5)

In the aftermath of Black Manta's attack, the Atlantean embassy is forcibly closed by the US government - leading Aquaman to Washington to plead his case. I am really enjoying Dan Abnett's run on this character, which is smashing Arthur's desire for peace between Atlantis and the surface world up against a variety of factors attempting to stop it from ever happerning. Philippe Briones' artwork is rock-solid, and the plot is developing at a rapid pace. This is a book whose fortnightly schedule is really helping it out. (4/5)

The new superheroes Gotham and Gotham Girl get an origin story - or at least part of one - while more worrying signs appear of the mysterious "Monster Men" on their way to Gotham City. I am struggling with this new story arc by Tom King and David Finch. Finch I can take or leave; his art is obviously highly skilled but simply not too much to my tastes. Tom King, on the other hand, has really impressed me with his brilliant work on The Omega Men and The Sheriff of Babylon, and I am disappointed that the inventiveness and narrative strength he demonstrated there is not turning up here. It feels as if very little happens in this issue - to be honest it feels as if very little has happened in the last three. (2/5)

Oliver Queen is presumed dead, and his entire fortune has been stolen away by his traitorous right-hand man. Of all the relaunched DC titles in their Rebirth initiative, Green Arrow is fast firming up as my favourite. Benjamin Percy has absolutely zeroed in on precisely what makes Oliver an iconic DC hero: the humour, the politics, and the immensely strong sense of social justice. He also gives Oliver the perfect new enemy to fight: what else but a super-villain bank? Juan Ferreyra's guest art is exceptional as well - I am really enjoying the hell out of this comic. (5/5)

Superman takes his son to the Fortress of Solitude - only to discover the Eradicator is already there. With the Eradicator here in Superman and Doomsday trashing Metropolis over in Action Comics, it really feels like an early 1990s nostalgia party in DC Comics at the moment. It's a nice complication to this current father-and-son storyline. Jorge Jiminez's fill-in artwork is excellent, and Gleason and Tomasi continue to nail the characters. My only real issue is another continuity one as with Birds of Prey: this Superman is from the original pre-Flashpoint universe, and knows the Eradicator. Does this mean the Eradicator is from the original timeline too? I finished a little confused. (3/5)
Posted by Grant at 10:52 PM