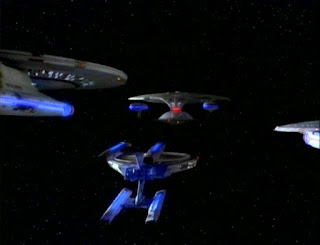 It is 23 September 1991 and time for the Season 5 premiere of Star Trek: The Next Generation.

The Klingon civil war continues. While Worf (Michael Dorn) defends the Empire from the Duras family, Picard (Patrick Stewart) leads a Starfleet mission to stop the Romulans from influencing the outcome of the war. This blockade leads Picard into an unexpected encounter with a Romulan commander (Denise Crosby) who claims to be the daughter of former Enterprise security chief Tasha Yar.

"Redemption II" is a somewhat messy season premiere. The material it includes and the narrative ground it covers are worthwhile and dramatic, but there is simply too much squeezed into one episode for it all to properly work. The episode is ultimately as frustrating as it is entertaining.

Let us start with Worf, clearly some time - at least weeks - into his new life as a Klingon warrior fighting for the Empire. Here the episode is on very solid dramatic ground, since it allows the opportunity to contrast Worf against Klingons in general and showcase the ways in which he stands apart from his people. He is ruled by honour, but in Worf's case it does not come hand-in-hand with a desire for violence for its own sake. It seems a life in Starfleet has influenced him more than he might admit. By the episode's conclusion, and with the war at an end, he requests he may return to his duties on the Enterprise. It feels a little abrupt, but honestly only a little.

Worf's storyline is packed with gloriously enthusiastic performances by the various Klingon characters, including Gowron (Robert O'Reilly), Kurn (Tony Todd) and particularly the Duras sisters Lursa (Barbara March) and B'Etor (Gwynyth Walsh). It is a shame Lursa and B'Etor were not used more often. They return to the franchise in Deep Space Nine the following year before dying in the feature film Star Trek: Generations.

Over on the Starfleet side Commander Data (Brent Spiner) is given a temporary command of a starship in Picard's blockade, leading to a personality conflict with his new first officer Hobson (Timothy Carhart). There is essentially an entire episode of The Next Generation squeezed in here, with Data forced to prove himself against a new crew who do not fully appreciate his capacity as an android. It is a shame it is squeezed in here, because it simply feels like a missed opportunity.

Back on the Enterprise Picard is faced with a new adversary: Romulan Commander Sela, daughter of Tasha Yar. It is a plot development that was brought to the Next Generation production team by Denise Crosby personally, as she was keen to return to the series again after making a guest appearance in Season 3's "Yesterday's Enterprise". On the positive side Crosby is solid in the role, and sets herself up well as a recurring antagonist. On the negative side the entire episode pretty much has to grind to a halt to explain back story to the audience. While the viewer should be concentrating on Klingon civil war and Romulan espionage, they are instead faced with the likes of "Hey, so remember how two seasons ago there was that parallel universe time travel story where a character who died four seasons ago was alive again, but went back in time on another Enterprise 24 years into the past? Well she didn't die then, but did die a few years later after giving birth to a half-Romulan daughter, and that daughter's now a villain in the present, and only Guinan (Whoopi Goldberg) knows any of this is true because she has special powers upon which we cannot elaborate..." It is tortured, and like the Data-in-command subplot really deserved an episode of its own to lay out all of the history and generate some proper drama.

The tragedy is that after all of this complicated messiness introducing Sela she only appears in one more episode in the entire series.

"Redemption II" is a messy and awkward episode that is entertaining to watch but is simply overstuffed with content. While not bad it does a very effective job of showing that it could have been so much better. It is good, but it is also frustrating.
Posted by Grant at 7:38 AM