Star Trek: The Next Generation: "A Matter of Time" 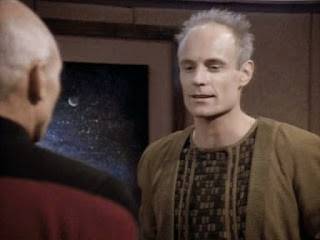 It is 18 November 1991, and time for another episode of Star Trek: The Next Generation.

An asteroid has struck the Federation-controlled planet of Penthara IV. When the Enterprise travels to assist in halting an ecological disaster, its crew is visited by an eccentric time travelling historian from the 26th century: Professor Berlinghoff Rasmussen (Matt Frewer).

Comedy takes the lead over drama in this slightly odd episode, one originally written for Robin Williams but re-worked for Max Headroom star Matt Frewer once the former turned down the offer due to commitments to Steven Spielberg's Hook. You can see how much the episode was tailored to Williams, and its a testament to Frewer's talent that he absolutely makes it his own. There are certainly much better episodes of The Next Generation out there, but this one satisfies pretty well on its own merits.

There is always a risk with a character who is intentionally irritating that he might become too irritating for an audience to tolerate. "A Matter of Time" skirts the line occasionally, with Rasmussen constantly pressuring the Enterprise command crew to complete questionnaires and needling them for their opinions on 24th century technology and their opinions of it. He is almost annoying to watch, but thanks to Frewer's comic talents he usually errs on the side of humour. What is interesting is how each member of the Enterprise command crew react to Rasmussen's presence. Worf (Michael Dorn) is immediately suspicious and disgruntled. Picard (Patrick Stewart) has a more measured an easy response. Dr Crusher (Gates McFadden) seems actively smitten.

While all of this is going on, La Forge (LeVar Burton) is down on the surface of Penthara IV helping avoid a nuclear winter-style ecological catastrophe. It is a fairly well crafted science fiction B-plot, with multiple complications and challenges and a strong three-act structure of its own. It also leads to a very nicely played scene between Picard and Rasmussen: faced with the choice of doing nothing and definitely killing thousands, or doing something and possibly killing millions, Picard needles Rasmussen for any clue as to what future history says he should do. It's a lengthy scene, and Stewart and Frewer play it very well.

The episode's twist is a good one: Rasmussen is a time traveller, but he is from 22nd century New Jersey where he murdered an actual 26th century historian and assumed his place. His questionnaires, along with selective pilfering of equipment throughout the episode, are entirely aimed at him reverse-engineering them in his own time and getting rich from creating them two centuries early. It is a nice shift, and transforms Rasmussen's shifty, fidgety kind of personality into something quite nasty without Frewer actually changing his performance. It's just a matter of perspective, nowhere more so than when one rewatches Picard's pleas for Rasmussen to tell him what to do with Penthara IV. The first time around it seems Rasmussen is refusing to change the course of history. The second time around it's obvious he won't tell Picard what happens because he does not actually know. This really is an episode worth watching twice.

While the writing is a little shabby around the edges, "A Matter of Time" is a nice comedic episode with a surprising conclusion and a great guest performance by Matt Frewer. It's the seventh good episode out of nine, giving Season 5 a quality ratio of 78 per cent. This has always been my favourite season of Star Trek: The Next Generation, and so far this rewatch is not changing my opinion.
Posted by Grant at 7:58 AM