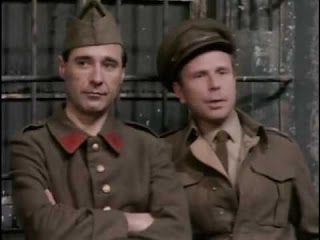 It is 30 November 1972, and time for another episode of Colditz.

A new inmate arrives, whose cheerful manner and over-the-top Britishness immediately raise the suspicions of his fellow prisoners. Lt Player (Christopher Neame) takes the sudden opportunity of a break for freedom, and soon finds himself on the road to Vienna - and experiencing the most remarkable string of unexpected encounters.

I had assumed after the initial trilogy of introductory episodes that Colditz would now restrain itself to the confines of its castle prison. Instead "Lord, Didn't It Rain" turns out to be a surprise: after a weird misdirection in its opening minutes most of the episode takes place in Germany and Austria as Dick Player makes his dangerous attempt at escape.

The episode initially seems to be yet another story about a new prisoner, much like the series did with Lt Carrington (Robert Wagner) the previous week. The British prisoners meet Captain Edward Bentinct-Boyle (Neil Stacy), an officer so ridiculous "what-ho chaps" British that they simply do not believe his story. They assume he is a mole - someone pushed into the camp to listen in on the escape plans and inform the Germans. He is an irritatingly over-the-top character, and it's a bit of a relief that he doesn't continue in the series beyond this one appearance.

The episode unexpectedly takes a left turn when the opportunity for an officer to escape presents itself. With no notice or time to prepare, Player hides inside a mattress cover and manages to get himself out of Colditz altogether. From this point the episode abandons events in the castle altogether to focus solely on Player's attempt to get to Austria and make contact with a family friend there. It is a chain of improbable circumstances and bizarrely unlikely encounters. Player, who speaks fluent German, has the misfortune of escaping in the middle of a lengthy thunderstorm and is soon soaked through. He uses what little money he has to find food, only to get caught in conversation with a German soldier. He tries to walk to the next town, and finds himself being offered a lift from an unsuspecting SS officer. As his journey goes on, he gets sicker and sicker until he can barely stand.

The episode reaches its climax in Vienna's American embassy. Weakened close to death, and desperate for help, Player reaches out to the American ambassador for money to pay for the remainder of his journey. The ambassador forces him out of the building, and back into German hands. The next time we see him, his pale weak body is getting shoved towards solitary confinement.

It would seem the most ridiculous sort of a storyline were it not essentially a true story. In 1940 an officer named Peter Allan did indeed escape Colditz inside a mattress. He was free for nine days, getting as far as Vienna before being forced from the American embassy and captured by the Germans. Even the tense car ride with the SS officer actually happened. Knowing that this series is based on true events really helps episodes like this - it's unlikely you would buy the story otherwise.

It is not perfect. A lengthy part of the episode sees Player cared for by a sex worker named Sophie (Gillian Brown), who is a poorly-presented character hampered by a weak performance. It is also strange that the episode spends so much time in its early minutes on Bentinct-Boyle. Altogether though, it is another entertaining hour from the Colditz team.
Posted by Grant at 7:41 AM