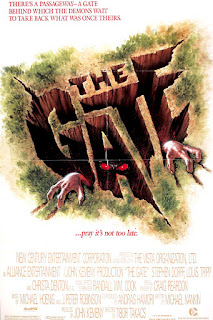 When Glen (Stephen Dorff) and his best friend Terry go digging in a building site for geodes, they accidentally open a gate to another dimension. While Glen's parents are out of town for the weekend, imps invade Glen's house, and threaten to unleash an enormous demon into the world - unless Glen and Terry can close the gate.

The Gate is a 1986 children's horror film directed by Tibor Takacs. Today it is likely only remembered for being the film debut of actor Stephen Dorff. It is a film I used to see on the shelf at the video store when I was child, but for some reason I never rented it out or gave it a watch until now - 30 years after it was originally released in cinemas.

It is pretty easy to see why the film has fallen into obscurity. It feels like typical mid-1980s filler. There is a story that is pretty generic, direction that for the most part is just competent with little imagination or flair, and a cast that say their lines on cue but do not really get the chance to express more than two dimensions at a time. Then the second half kicks in, and it becomes a lot more interesting and entertaining than I had expected.

There are some surprisingly effective visual effects in this film, particularly the imps that crawl out of the titular gate and begin to torment the kids trapped inside the house. They work because their execution relies on multiple techniques. In some shots they are puppets. In others they are actors in rubber suits working on a miniature-scale set. In some they have been blue-screened into the footage. In some they are models using stop-motion animation. By varying the style from one shot to the next the film manages to create a surprisingly believable and lifelike set of monsters, and they become a real pleasure to watch. A six-armed stop-motion demon at the film's climax is always nicely designed, if not quite as well presented.

The film also does a typically 1980s job of over-stepping the line in terms of what is and is not appropriate for children to watch. While the story is told from the point of view of a child, and is mostly populated with kids and teenagers, the violence and horror has a tendency to get mildly out of hand. In one scene Glen stabs himself in the hand with a shard of broken glass. In another a hallucinatory image of his friend Terry gets its eye gouged out with a Barbie doll's leg. A lot of people seem to bemoan Hollywood's lack of live-action children's films in the 21st century, but the truth is a lot of the children's cinema in the 1980s was not entirely suitable for children in the first place.

Nostalgia will likely draw some viewers back to this film if they saw it as a child, and yet more may find enjoyment in mocking it as they watch. It really is not worth recommending with a straight face, although the impressive special effects still hold a lot of integrity. The poor scripting, the awkward performances, the synth musical score - it all feels so wonderfully, ridiculously '80s. It is a bad movie, but an oddly fun one too.
Posted by Grant at 3:31 PM