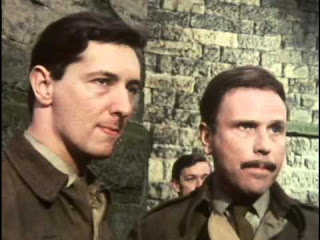 It is 19 October 1972 and time for the first episode of Colditz.

Captain Pat Grant (Edward Hardwicke) is one of a group of British soldiers captured by the Germans following the evacuation of Dunkirk. Taken to a prisoner-of-war camp, he immediately sets about planning an escape.

Colditz was a huge hit for the BBC in the early 1970s. The series, which ran for two seasons between 1972 and 1974, was based on the 1955 film The Colditz Story as well as the memoir of Major Pat Reid - who escaped from the real-life Colditz prison during World War II and who acted as the series' technical advisor. While all of the names were changed, the day-to-day detail of life as a prisoner of war (or POW) was for its time remarkably accurate. While it was not the first World War II television series on the BBC - it was pre-dated by Escape (1957) and Dad's Army (1968) - Colditz was Britain's first major attempt at depicting part of the war as a high-profile television drama.

The series is clearly aiming for a long build, since Colditz itself does not even appear in this first episode. Instead it follows Grant leading an escape attempt from a completely different German prison. It all works very much like a low-rent version of The Great Escape, condensed down to 50 minutes and without any Americans. There is the introduction of the prisoners, a quick recce across the rooftops at night, and ultimately a slow and careful construction of a secret tunnel underneath the prison walls. For a 21st century viewer the number of clichés is remarkable, but it is also difficult to work out how many of them would have already been clichés in 1972. To be honest I guess quite a few of them: World War II might have been comparatively fresh territory for the BBC but it was already well played-out in British cinemas.

Edward Hardwicke is a strong and likeable protagonist. He's a very serious man, driven by his desire to escape, and so the script does not give him any opportunities for levity or humour. He has enormous integrity, however, as well as a lot of smarts. He does not seem to be a flawless hero either - his escape attempt fails, after all - and that makes him even more identifiable and easy to which to relate. I know Hardwicke best for playing Dr John Watson in ITV's acclaimed The Adventures of Sherlock Holmes opposite Jeremy Brett - he plays an enormously different character here.

The episode is not entirely without humour, of course. It is primarily supplied by John Golightly as Captain Ian Masters, a far more relaxed prisoner who voices an awful lot of reservations about Captain Grant's scheme. With his neatly parted hair and thin moustache he also seems a parody of the sort of characters one sees in British war movies. Whether that was intentional or not I have no idea, but he is certainly entertaining.

Michael Sheard crops up as the prison kommandant, which is a pleasing thing for those like me who like to watch out for perennial BBC actors. Depending on your own viewing habits he is best known as Admiral Ozzel in The Empire Strikes Back or Mr Bronson in Grange Hill.

Despite feeling a little too familiar, this first episode of Colditz is a solid television drama. It's comparatively modest budget - which I must admit was probably quite high by BBC standards - forces it to pull back a little on action and thrills, which actually makes it all feel a bit more realistic than the standard war film. I find myself keen to discover what happens to Grant when he finally reaches Colditz.
Posted by Grant at 7:51 AM