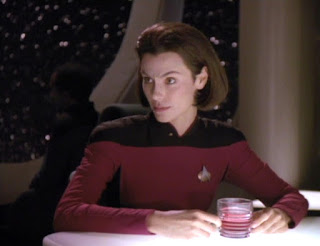 It is 7 October 1991 and time for another episode of Star Trek: The Next Generation.

When a Federation outpost is attacked by Bajoran terrorists, Captain Picard (Patrick Stewart) is ordered to track down the parties responsible. To assist him in his mission he is temporarily assigned a new officer: the contentious, rebellious and criminally convicted Ensign Ro Laren (Michelle Forbes).

As these reviews of The Next Generation track on, it is worth noting where the various elements of its sister series Deep Space Nine - which went into development soon after this episode was broadcast - first appeared. Season 4 introduced the Trill and the Cardassians. This episode makes a huge step forward in establishing the DS9 back-story. It not only brings the Cardassians back for a second appearance, but also introduces Bajor: a peaceful planet of artists and religious acolytes who have been enslaved under Cardassian rule for decades. It is also, by the by, a great episode in its own right.

Here's the thing: when Gene Roddenberry created The Next Generation he stipulated very firmly that by the 24th century conflict among humans was a thing of the past, and that as a result there should never be any inter-personal conflict between the regular characters. While it was a nice ideal, in purpose it was effectively tying a mill-stone around the writers' collective necks. Television drama relies on conflict, and while it's obviously possible to generate that conflict between the regular characters and guest characters the closing-off of any drama between the Starfleet officers rendered the first season of the series in particular as remarkably flat and unengaging. Things managed to loosen up over the course of the subsequent seasons but the Next Generation cast continued to feel a little too safe, happy and comfortable.

"Ensign Ro" deliberately shakes that up. The entire purpose of the episode is to introduce a new recurring character who could act as the opposite of Roddenberry's utopian concept. Ro Laren, played marvellously by Michelle Forbes, is spiky, rebellious, disrespectful and storms around the Enterprise with a gigantic chip on her shoulder. She is from a mistreated and largely abandoned culture with a horrendously traumatic childhood, and she has been hitting back at it ever since. By throwing such an angry rock into the Next Generation pond the writers (in this case producers Michael Piller and Rick Berman) manage to create wonderful ripples of drama across the regular cast. Picard chafes against her back-chat and disrespect. Riker (Jonathan Frakes) actively and openly despises her. It's a great episode for Riker, actually, since we usually get to see him in a genial, playful manner from the perspective of his colleagues. From the subordinate view he's surprisingly intimidating.

The episode also creates some great material for Whoopi Goldberg, who appears here as the bartender Guinan. She is the only one to actually engage with Ro without pre-conceptions, and in her typically smooth fashion manages to get under Ro's skin and get her to open up. Through Guinan Ro manages to make a breakthrough with Picard, and the two begins a long-running and immensely satisfying relationship, one that reaches a proper and well-developed conclusion by the time she departs in Season 7's "Preemptive Strike".

It is comparatively unusual for an episode of Star Trek to focus on a guest character over the regular cast, and for generally good reasons, but in this case the focus on Ro works incredibly well. It gives the series room to fully introduce and expand upon her character. She appears in another seven episodes between here and the end of the series, and she works so well with the audience precisely because she is so well introduced here. She has always been one of my favourite Next Generation characters. She was popular with the production team as well, with both Piller and Berman so enchanted with the character that they effectively based Deep Space Nine around her. (Forbes then famously declined to sign up for a regular TV role, leaving them to re-work the series and create Major Kira Nerys to replace her.)

The episode challenges Roddenberry's ideals regarding Starfleet and the Federation in other ways. The core twist of the story is that a Starfleet admiral is surreptitiously collaborating with the Cardassians to track down and eliminate a Bajoran terrorist group, even though that terrorist group has not in fact attacked the Federation at all. It shows an uncharacteristic level of corruption and deceit for Starfleet, and is the first step towards the more cynical attitude displayed in Deep Space Nine. The franchise is shifting ground, and in a more radical fashion than I suspect many viewers realised at the time.

This is the third good episode in a row, maintaining Season 5's perfect quality ratio of 100 per cent. I wonder how long this streak will go.
Posted by Grant at 11:55 AM