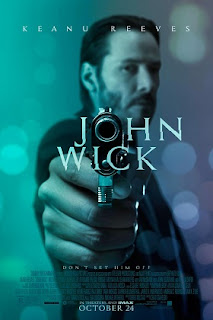 I really appreciate a film that has a clarity of purpose, and a passionate drive to fulfil that purpose in the most inventive and effective manner possible. That is one of the main reasons I really adored John Wick, a 2014 action film directed by Chad Stahelski and David Leitch. Its story is really incredibly simple. John Wick (Keanu Reeves) is a retired assassin-for-hire whose wife has just died. When Russian gangsters come to his house, beat him senseless and steal his car, he sets out onto the streets of New York to get revenge.

That is not all of the set-up, but we can leave the other part until later into the review in case you have not seen the film yet. To keep things effectively spoiler-free, John Wick is a tightly edited and beautifully shot series of incredibly violent action scenes with a body count that rivals the most excessive shoot-outs by Hong Kong's John Woo - in fact it seems clear to me that Woo's oeuvre, including Hard Boiled, The Killer and A Better Tomorrow, is one of the clear influences over Stahelski and Leitch's film. Viewers looking for a stunning, energetic and oddly off-kilter action movie are going to love John Wick. Anyone with a dislike for violence, blood or indeed Keanu Reeves should probably seek entertainment elsewhere.

As anyone who has already seen John Wick knows, the Russian thugs that beat Wick up and steal his car also beat his puppy to death. It was a final gift to him from his terminally ill wife, with her idea being he would have something to care for while he grieved her. The puppy's death is blunt and miserable, and it has a remarkable effect on the rest of the film. For one thing it really motivates the audience to be on Wick's side, because we are horrified that an innocent animals has been killed. For another it signals to the audience that this is going to be a particularly hard-edged action film, because killing the cute dog is simply something that Hollywood does not ever do.

From this shocking opening sequence the film runs along a pretty linear ride as Wick tools up and heads out into the night. The dog-murdering hoodlum (Alfie Allen) turns out to be the son of Wick's former employer, a powerful Russian mobster. When it becomes clear Wick is not going to let the matter lie, a hit squad is sent to his house. He kills them all. He then tracks the hoodlum son to a mob-owned nightclub, and kills another pile of people. On it goes. The body count is remarkable. Wick alone kills 77 people over the course of a 101-minute film. The plot is really not the focus of the film. Instead it is the remarkably various series of shoot-outs and martial arts fights that ensue. The photography and lighting is incredible - Michael Mann (Heat) would seem to another clear influence - and the choreography is both inventive and perfectly presented. It seems likely that John Wick was the best American action film of its year.

What makes the film particularly enjoyable is just strong its cast is. Keanu Reeves is a stunningly photogenic actor who works wonderfully in a fairly narrow range. As Wick, who is cold and brooding with little dialogue and a deadpan demeanour, he is pitch-perfect. That almost sounds like damning with faint praise, but I genuinely mean it: it takes a certain kind of actor to pull off this kind of role, and Reeves is perfectly suited to it. I have been a fan of his since his Bill and Ted days, and I honestly think this is some of the best work he has done.

The supporting cast includes faultless actors like Ian McShane, Willem Dafoe, Michael Nyqvist, John Leguizamo, Lance Reddick and Adrienne Palicki. Despite the violence and the shocking dog murder, the bulk of the film is surprisingly funny. It is a bleak sort of humour, but it really makes the film tremendously entertaining. John Wick is an absolute must-see for action enthusiasts. It is the directorial debut for its two directors, Chad Stahelski and David Leitch, after years of experience working as stunt artists and coordinators. They are making John Wick: Chapter Two at the moment, but I am really keen to see what they can do beyond that, and how great a contribution to action cinema they can go on to make.
Posted by Grant at 5:08 PM