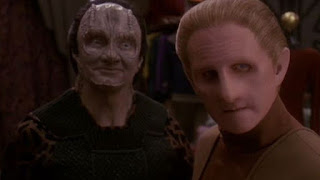 As war approaches between the Federation and the Klingon Empire, Odo (Rene Auberjonois) is unexpectedly afflicted by a degenerative disease that is removing his ability to shape-shift. His only hope appears to be to contact his own people, but he has not spoken to them since he killed one of their number a year ago.

"Broken Link" continues Deep Space Nine's tradition of open-ended season finales. They are not the cliffhanger endings made famous by Star Trek: The Next Generation, but they do point to future storylines and tends to set things up for the following season in an ominous fashion. The end of Season 1 foreshadowed a Bajoran civil conflict, Season 2 introduced the Dominion and Season 3 saw Odo kill a changeling. Now we see the conflict between the Federation and the Klingons look set to explode, and the Dominion appear to be behind it.

There is a strong sense of 'righting the ship' about "Broken Link". The series had a very strong trajectory in its second and third years in terms of introducing the Dominion and the shape-shifting Founders that established it. They were slowly introduced as a major political power in the galaxy's Gamma Quadrant, and a genuine threat to the Federation. It felt as if pieces were being slowly shifted into place across a game board, in advance of a major galaxy-spanning conflict. Then Season 4 started, Worf joined the cast, and everything suddenly focused on the Klingons for a year. This episode ties directly into the finale of Season 3, "The Adversary", and pushes Deep Space Nine firmly back in the direction of the cold war with the Dominion. It is a very welcome development.

Odo is punished for the murder he committed - he is stripped of his shape-changing abilities and apparently made human. This makes the third regular character this season to be banished from their own people, after Worf in "The Way of the Warrior" and Quark in "Body Parts". Add in Garak and the station seems to be rapidly filling up with exiles.

When it becomes clear that Odo will need to return to his people, the episode does a great job of emphasising the fearsome nature of the Dominion. The Defiant flies out into the Gamma Quadrant openly transmitting a call for help. When that help arrives it is in the form of a solid half-dozen Jem'Hadar ships. A crew beam onboard, accompanied by the female changeling (Salome Jens), and pilot the Defiant in secret to the Founders' new home planet.

It is great to see Salome Jens back as the female changeling, who acts effectively as a spokesperson for the entire species. She has a very unsettling demeanour and a cold calmness that fluctuates between visible contempt and a sort of gently condescending affection. The Founders are one of Star Trek's most interesting alien civilizations: a persecuted minority so fearful of further attack that they construct an entire oppressive galactic super-power purely to protect themselves.

Accompanying the mission is Garak (Andrew J. Robinson), who is desperate to find out if any Cardassians survived their failed attack on the Founders back in Season 3. 'They're dead,' the female changeling tells him. 'You're dead. Cardassia is dead. Your people were doomed the moment they attacked us.' It's a genuinely unsettling moment that really drives home just what a terrifying enemy the Dominion is.

Sisko (Avery Brooks) and Bashir (Alexander Siddig) accompany Odo and the female changeling down to the surface of a planet, where Odo is absorbed into a pulsating brown ocean of united changelings. Meanwhile Garak tries to sabotage the Defiant to fire its quantum torpedoes into the planet's surface, in the hopes of killing the Founders. Worf (Michael Dorn) finds him, and is forced to physically subdue him. It's a great little close-quarters fight, and momentarily makes it feel like the earlier, more likeable Worf of The Next Generation is back. I have found throughout this season that Worf has been written a little off-key: grumpy where the character used to be dry, cold and mean where he used to be reserved and private. Hopefully the writers get the character's balance back next season.

By the episode's end Odo has been transformed into a human, but he still remembers snatches of memories from his time absorbed into his people (the so-called "Great Link"). He remembers learning that Gowron (Robert O'Reilly), the leader of the Klingon Empire, is secretly a changeling: the entire growing conflict between the Klingons and the Federation has been manipulated by the Dominion from the beginning. Roll on Season 5.

Season 4 wraps up with 16 good episodes out of 25, and a final quality ratio of 64 per cent. That puts it marginally below Season 3 (69%) and well below the Season 2 high (77%), but still just above Season 1 (63%). That actually feels about right. There have been some great episodes in Season 4, but it does feel like it struggled a bit.
Posted by Grant at 7:37 AM