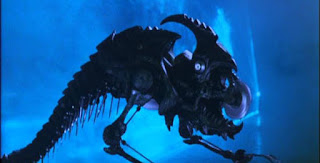 On the planet Sirius 6B, the last remaining garrison of Alliance soldiers wait for further attacks from the New Economic Block, or NEB. It has been months since any sighting of the enemy. Any NEB soldiers who might risk approaching the compound will be immediately killed by the underground robots known as "Screamers". When a sole NEB soldier does arrive and is killed, it turns out he was carrying a request for a truce and a peace negotiation. Commanding officer Joe Hendricksson (Peter Weller) sets out to meet as requested, and in doing so discovers there is more to the Screamers than he had been led to believe.

Screamers is a 1995 science fiction thriller based loosely on the short story "Second Variety" by Philip K. Dick. Its screenplay was written by Dan O'Bannon, who also adapted Dick's "We Can Remember It For You Wholesale" as Total Recall and who had co-written both Dark Star and Alien. It is a low-budget affair, shot in Canada by director Christian Duguay. I remember when it was originally released it received fairly poor reviews but quickly gained a small cult following. I had not seen the film in 20 years, so it seemed about time to revisit it and see how Screamers has held up.

Screamers presents a tremendously bleak and unhappy future. Interstellar exploration has basically collapsed into endless destructive warfare - warfare that has droned on for so long that pretty much everyone seems bored. Sirius 6B has been bombed into a radioactive wasteland - soldiers have to regularly light up red cigarettes to breath in anti-radiation meds. Everybody smokes in this movie - either for medication or just because they like cigarettes. It makes everything seem doubly depressing, to be honest, where all anybody has left to care about is where their next smoke comes from.

Before Hendricksson can embark on his mission a spacecraft crash-lands rights outside the compound door. There is only one survivor, and he seems to think the war that's just ended is still on. He accompanies Hendricksson out to the NEB bunker, where they find a lot more questions that answers. In the best Philip K. Dick tradition, the story just gets more contradictory and paranoid. The Screamers, which are built automatically in an underground factory, appear to be evolving. They may even be able to simulate human beings. That in mind, who can be trusted to be human any more?

After a fairly shaky 10 minutes, Screamers settles down quite nicely into being an effective small-scale science fiction thriller. The budget really limits the film, but Duguay adapts well. Much of the film is visibly shot inside some kind of disused factory, but its long concrete corridors and ominous shadows make for a nicely eerie setting. Peter Weller delivers a wonderfully dry, weary performance. The limited supporting cast, while not exceptional, all do reasonably solid jobs. The Screamers themselves are very nicely realised with a combination of mechanical props and stop-motion animation. There are a few surprises as the story progresses, and the uneasy tone of Dick's works is expressed very well.

Is it a great film? No, not really, but given its budget I am happy to cut it quite a lot of slack. There are more than enough nice ideas and entertaining moments to get the viewer from the opening titles to the closing credits. It's cheap, pulpy and a little bit ridiculous, but it's also wonderful for precisely those reasons.
Posted by Grant at 10:39 PM