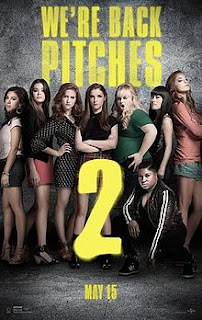 This is twice in a row I have found myself watching a comedy sequel. I am always reluctant to watch them, because generally my expectations have been raised to a certain level by the original film, and that sequel almost without exception is inferior in nearly every way. It's a phenomenon that seems regular enough that a smarter viewer would simply refuse to watch a comedy sequel ever again, yet I constantly live in hope. Like a moth to a flame, I inevitably watch the sequel and inevitably feel disappointed by the sequel.

The latest film off the ranks is Elizabeth Banks' 2015 sequel Pitch Perfect 2. I really enjoyed the original. It told an overly familiar story - a disparate group of college students unite to win an a capella championship - but it told it very well. The performances were top notch. The jokes were well-placed and funny. The a capella singing was highly entertaining in its own right. It was also the kind of film that grew on me after the fact. It encouraged a sort of immediate nostalgia, because it was ultimately such an uplifting and heart-warming kind of a film. It was that weird sort of nostalgia that led me to watch its sequel, fearing the worst but hoping for the best.

In the end Pitch Perfect 2 is somewhere in the middle. It commits the most obvious and basic crime of all sequels, which is that it essentially repeats the same story with a few pieces of furniture moved around the room. Instead of a group of college students learning to work as a team to win a national championship, the same group of students have to re-learn to work as a team to win a world championship. Lead protagonist Beca (Anna Kendrick) once again has to juggle her priorities between her own music and the Barden Bellas. Fellow Bella Chloe (Brittany Snow) once again over-obsesses over the group's future. Fat Amy (Rebel Wilson) and Lilly (Hana Mae Lee) continue to get most of the best jokes and lines, and exist pretty much solely to deliver them.

It is a film that plays it safe, and that is ultimately to its detriment because the same beats are never quite as effective the second time around. At the same time it is a much better sequel that we usually get to see: the energy is still there, and while the jokes seem familiar they're still good jokes. There are even a few new characters to lift the film up a little, including Keegan-Michael Key as an abrasive record producer and Hailee Steinfeld as the oddly named junior member Emily Junk. Most surprising of the new characters is popular Danish actor Birgitte Hjort Sorensen as Kommissar, the arrogant leader of the successful German a capella group Das Sound Machine.

Occasionally the film pushes a little too hard and exaggerates events too much. A weird musical face-off in an eccentric millionaire's basement simply pushes too much and winds up being more irritating than funny. Similarly a few jokes that would have seemed edgy and self-aware in the original wind up feeling crass and intermittently mildly offensive. It's not enough to derail the film by any stretch, but it is enough to dent it. The final result is a film that is a pleasing distraction for fans of the original, but not distinctive or original enough to increase its audience.

Since the release of Pitch Perfect 2 a third film has been confirmed, with a release date in December 2017. I am unsure what can be done with another Pitch Perfect. After two films the territory seems fairly arid and farmed out, but based on this first sequel there is not a lot of appetite to farm new ground.
Posted by Grant at 5:04 PM