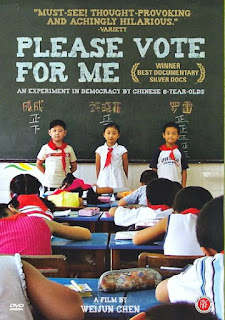 Three rivals stand for election. Politics are being discussed in corridors and washrooms. Dirty tricks are being planned, and campaign strategies sorted out. The competition is fierce and brutal. In a formal debate, one candidate hammers another so fiercely that she bursts into tears and runs from the room. Over-sensitive? Not particularly: all three candidates are eight years old.

Please Vote for Me is a riveting documentary that charts the election of a class monitor in a Chinese primary school. The students have been encouraged to engage in an election campaign as a lesson in modern democracy. Three candidates have been chosen – Luo Lei, Xu Xiaofei and Cheng Cheng – and there varying efforts to win the respect and admiration of their classmates forms the core of this unique gem of a film. It forms part of a series of political documentaries originally broadcast for the BBC's Why Democracy project. This particular film's funding comes from South Africa and Denmark, although its director Weijun Chen is Chinese.

This is a film that really catches you off-guard. After all, it is a documentary about eight year-olds learning about democracy - how edgy can it be? It begins by introducing the set-up and the three disparate candidates. The first is Luo, the incumbent, who jealously guards his power and aggressively defends it while being egged on enthusiastically by his helicopter parents. The second is Xu, bookish and under-confident, who is easily the most reluctant candidate of the three. Finally there is Cheng Cheng, who seems to treat the entire exercise as an unparalleled opportunity to entertain his classmates and gain blunt popularity any way he can.

The entire election rapidly slides off the rails. We get to watch children arrange back-room deals for votes, currying favour with popular students, and actively developing negative attack campaigns. It rapidly becomes a political bloodbath. Disturbing as it may sound, this is the most appealing aspect of this documentary: seeing how rapidly a classroom of eight year-old children can descend into the most aggressive, vicious political environment imaginable. It is a deeply revealing film, that entertains, regularly amuses and ultimately gives a lot of ominous food for thought. It seems that politics, along with all the backstabbing, diplomacy, strategy and manoeuvring it entails, is a truly universal concept.
Posted by Grant at 8:34 AM