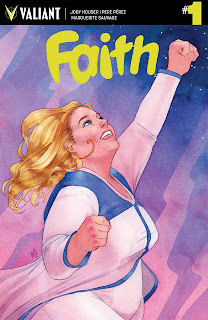 Faith has been a popular character for Valiant, and just after she's enjoyed a successful solo miniseries she has now graduated to her own ongoing monthly from writer Jody Hauser and a range of talented and distinctive artists.

This is in many respects a very traditional sort of superhero narrative. Faith is a superhero in Los Angeles with a secret identity and a day job working for a tabloid news website. She is struggling to hide her true identity - some friends know, some don't - as well as to juggle being a crime-fighter with having a normal life. The art is strong. Pere Perez handles the bulk of it, with Marguerite Sauvage and Colleen Doran taking on a range of extra pages including dreams and a quick origin recap.

As is often the case with these books, it is not what the story is but how it is told. Jody Hauser writes a fantastic character with Faith: she's uncertain, yet powerful, and has a geeky edge that I suspect will appeal to quite a few readers. If you're looking for a rock-solid superhero book with a female protagonist and a bit of a fresh angle, Faith is definitely worth checking out. (4/5)

Under the cut: reviews of Darth Vader, Rai and Spider-Man.

The villainous Dr Cylo has betrayed the Empire and is stealing the Star Destroyer Executor and taking the Emperor captive. The only thing standing between him and victory is Darth Vader, Lord of the Sith. This is a marvellous big-screen epic, an issue that hits the ground running and keeps driving on with stunning moments and pay-offs right up to a cliffhanger ending. This is the final storyline for Gillen and Larroca's Darth Vader, and they are going out in a spectacular fashion. This comic has been phenomenal. (5/5)

In this tie-in to Valiant's 4001 AD miniseries, Rai's replacement Aboto encounters his predecessor, Sai. It is a beautifully composed and oddly meditative issue. Cafu's artwork and Andrew Dalhouse's colours really bring the issue to life, but it is a very sedate and distant sort of life. That's not necessarily a bad thing. There is an eerie sort of unsettling vibe to this issue, and it really benefits from its particular look. Rai has been a really strong series, telling a great science fiction story and back with excellent artwork. This issue really is no different. (3/5)

I was dreading this issue a little, since it is yet another of Marvel's Civil War II tie-ins. Thankfully Bendis keeps the link simple, and actually uses it to develop characters and story in the continuing Spider-Man storyline. While the usual caveats about decompressed story-telling remain, this is a beautifully written issue with great characters having smart, engaging conversations. Fill-in artist Nico Leon does a superb job as well, sticking to a house style and bringing Bendis' trademark dialogue to life. (4/5)
Posted by Grant at 11:32 AM