The X-Files: "My Struggle II" 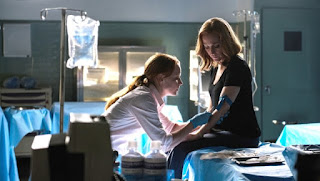 People across America begin falling ill with what seem like a collection of serious viral infections. While Scully (Gillian Anderson) and Einsten (Lauren Ambrose) struggle to identify a cure, Mulder (David Duchovny) - who is already badly infected - races to North Carolina for a confrontation with the infection's source: the Cigarette-Smoking Man (William B. Davis).

There is something genuinely sad about what has happened to The X-Files. For its first few years it was hands-down the best American television series on the air. It was provocative, atmospheric, intelligent and unexpected. It followed Twin Peaks in pushing the visual aesthetic of television drama towards a properly cinematic look, and it arguably pushed that shift much harder and for much longer. It was successful enough and effective enough to become properly iconic. Then it started to slip a little, an episode here or a story arc there. The long-running story arc of Mulder's quest to prove the existence of UFOs became overly complicated, and then hopelessly muddled, and eventually flat-out contradictory. By the time the series ended at its ninth season, the arc was not only failing to work but was actively destroying the series.

One of the nice things about the 2008 feature film I Want to Believe was that it abandoned the by-then utterly ruined conspiracy story in favour of a self-contained horror narrative. One of the worst parts of this 2016 reunion series is that it returns to that ruined conspiracy arc and picks right back up setting fire to it. I watched the first episode of The X-Files premiere here in Australia. I followed the story the whole way. To be completely honest, I could no longer explain it to you. By this stage it has become hopelessly nonsensical. There was a time when I could. That time is long-since past. Now this once magnificent series is like a heartless machine: its purpose has eluded it, and it's now a senseless automaton. It says the things it always used to say. It does the things it was designed to do. It no longer has the slightest clue as to what it is doing.

The real tragedy here is that it's had the one show-runner all the way. It was Chris Carter who created The X-Files, and Carter who wrote many of its best early episodes. It is Carter was remains today, destroying his own franchise with as much diligence and enthusiasm as he had in constructing it. There is still so much potential in The X-Files. Duchovny and Anderson slipped back into their roles here so comfortably. It has been a pleasure to see them perform Mulder and Scully again. This season did manage one great episode and two reasonably enjoyable ones. The other three - including this bizarrely awful finale - were all written by Chris Carter.

There are lovely glimmers of quality scattered around here. It is great to see William B. Davis back as C.G.B. Spender, the notorious "Cigarette-Smoking Man". His new scarred appearance is perfectly showcased, and helps to ease over the incredulity of seeing him back (in his last appearance he was blown up by a rocket-propelled grenade). The episode's cliffhanger ending is straight-up old-school X-Files, and clearly expects that there will be more episodes to be made in the future. Lauren Ambrose feels a lot more grounded and dramatic as Einstein (it's still a ridiculous name), which bodes well if she does wind up taking over as a series lead. I am less impressed by Robbie Amell as Miller, but am willing to see him continue if his material improves.

One of the episode's biggest flaws is that it sets up a massive global epidemic, but does not have the budget to properly express its scale to the audience. It is somewhat difficult to believe that Scully and Einstein in a Washington D.C. hospital laboratory are going to save the entire world within the space of a few hours. There is also the problem that comes with that scale. The entire world is dying. The episode climaxes with a huge alien spaceship hovering over the Potomac River. These are the sorts of story events that can not be skipped over or ignored: the entire world has changed, and I am not confident Chris Carter is the writer to show us that world in future.

I enjoyed parts of this new season, but all in all it feels like a badly misjudged move. The X-Files can continue. To be honest I still think The X-Files can thrive, but just as Star Trek: The Next Generation only excelled when it finally shook loose creator Gene Roddenberry so The X-Files desperately needs to escape from Chris Carter.

Six episodes in all: one great, two generally entertaining, three terrible. The final quality ratio is an even 50 per cent.
Posted by Grant at 5:07 PM