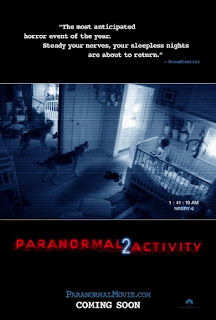 Paranormal Activity is a hugely successful, lengthy horror film franchise that has almost entirely passed me by. I watched the original film back when it was released onto home video, already well-inflated by popular acclaim and commercial buzz. I found it engaging enough, although terribly back-loaded. It is a film about a demonic presence haunting a young couple, told entirely via hand-held camcorders and security cameras. For about two-thirds of the film it is something of a chore: an interminable experience rather close to being forced to watch someone's home movies. When it finally got going it was tremendously effective and creepy, but I did question whether the payoff at the end was worth the work it took to get there.

The world has moved faster than I have, and with six sequels been and gone it seemed as good a time as any to try and sample them. Paranormal Activity 2 presents another house and another couple - this one with a teenage daughter and an infant son. It offers pretty much the same story: something invisible and evil is haunting their house, and we see the situation turn frightening via camcorders and security cameras.

Without wasting time, it is worth noting that there is a law of diminishing returns to these things. Seeing supernatural horror play out via grainy, fixed-point security cameras is never going to be as effective the second time. For the most part Paranormal Activity 2 does exactly what the first film did, only in a slightly less interesting fashion and over a much more tedious period. When ghostly events do occur, more often than not they are simply an object in the house banging or slamming and making a loud noise. It might make you jump, but it is not very scary. This is a horror film that does not horrify so much as startle.

There are some interesting elements in terms of plotting the film. It begins seemingly as an entirely unrelated story, with a whole new family - Kristi (Sprague Grayden) and Daniel Rey (Brian Boland) - in a brand-new house. Then Kristi's sister turns up, and it is Katie (Katie Featherston) from the original Paranormal Activity. The last time we saw her she was possessed and murderous, killing her boyfriend and wandering off into the night. We are watching a prequel. The events of the first film are yet to happen, and to a large extent Paranormal Activity 2 explains exactly what the hell was going on in Paranormal Activity. A second surprise comes when we finally reach the events of the first film, and this second one keeps going: it is both prequel and sequel in the one film. It is all rather cleverly worked out and satisfying - it is just a shame that the film itself simply is not particularly scary.

The performances are generally solid without being exceptional. Molly Ephraim is a stand-out, playing Kristi and Daniel's teenage daughter. At first she thinks the idea of living in a haunted house is pretty funny, but soon changes her opinion as things grow darker and more disturbing.

While I appreciate the work undertaken to make this prequel a proper extension and development of the original film, it struggles pretty badly to make an impact. The conceit of the original film is the sort of thing that works well once because it is unexpected. The same tricks played out the second time were never going to be as effective.
Posted by Grant at 9:22 AM