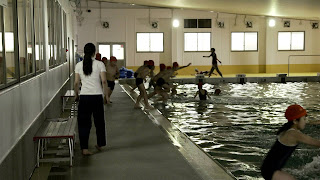 As a child, Maki and her three friends watched Emili be taken away by a strange man, and subsequently discovered her raped and murdered body in the school gymnasium. When all four surviving girls failed to describe what the murderer looked like, Emili's mother Asako (Kyoko Koizumi) demanded all four girls pay a penance - one which Asako would approve - in return for their failure. 15 years later Maki (Eiko Koike) is a tightly-wound, ruthlessly strict school teacher, and crosses paths with Asako again.

As I noted in my review of Penance's first episode, this is a five-part television drama by noted Japanese director Kiyoshi Kurosawa and based on the novel by Kanae Minato. The first episode, "The French Doll", was a bleak and unsettling character piece. The second, "Emergency PTA Meeting", strikes quite a different note. It is an unexpected satire about a school desperate not to displease its student's parents, and about how right and wrong behaviour can boil down to a difference of perspective.

Maki is clearly a troubled woman, although in different ways to Sae from "The French Doll". Maki has become a cold and unforgiving person. When she interrupts three boys bullying a girl in a classroom, she interrogates the girl so harshly that the parents send a letter of complaint. When a deranged knife-wielding intruder invades a swimming lesson, and Maki violently beats him unconscious, she is seen as a local hero and receives excessive praise for the same blunt harshness that - only days earlier - had seen her reprimanded in front of a PTA meeting. At the same time a popular fellow teacher named Tanabe (Kenji Mizuhashi) finds his reputation in tatters when instead of fighting the intruder himself he dives into the pool with the children. Back and forward their fortunes go, seemingly on the whim of a Vice-Principal obsessed with comments left on the Internet.

It is all that kind of satire that inspires wry amusement rather than belly laughs. It gives the episode a particularly distinctive tone that is separate from the previous episode and makes me wonder if every episode of this series is going to be different. The strange supernatural elements that skirted around the edge of "The French Doll" momentarily return here. It is still impossible to tell whether something strange is going on, or if the women who failed Emili as children are simply suffering hallucinations. The ambivalence is quite effective, and adds another intriguing layer to the story.

Production values are a little limited, as is generally the case with Japanese television drama. The musical score is a little too prescriptive - a problem that follows over from episode 1 - but Kurosawa does a great job working within his limitations and generating some very effective drama. He is helped by very strong performances by Koike and Koizumi. There is depth in both characters that extends beyond what has been written for them.

A last-minute twist sees Maki's story intersect once again with Asako's longing to solve her daughter's death. It is difficult to know whether the series is going to develop this thread further or simply showcase another traumatised twenty-something. It is rather wonderful to head into the third episode without any real idea of where this series is going. I am keen to find out.
Posted by Grant at 7:43 AM