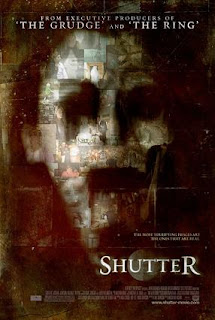 Jane Shaw (Rachael Taylor) travels to Japan for a honeymoon with her new husband Ben (Joshua Jackson). While driving down a country road at night she collides with a young woman, causing her car to crash. The dead woman's body can not be found. As Ben returns to work in Tokyo, he and Jane begin to be haunted by the woman's ghost.

What strikes me as remarkable about Shutter is not that it is a remake, but that it is a Hollywood remake of a Thai film (directed by 2004 by Banjong Pisanthanakun and Parkpoom Wongpoom) relocated to a Japanese setting in order to stylistically emulate all of the Hollywood remakes of Japanese horror movies that preceded it. For a while there was an ongoing line of American remakes of Japanese horror: The Ring, The Grudge, Dark Water, Pulse, and One Missed Call, for example. I am uncertain if it is an act of genius by producer Roy Lee - who also co-produced most of those films above - to shift Shutter over to tonally match them, or if it is some weird form of cultural appropriation. To the film's credit, its Japanese setting and style comes along with a Japanese director: Masayuki Ochiai, who had previously directed Parasite Eve and Infection.

Horror films tend to rise or fall on the basis of their imagery and ideas, and Shutter does some pretty great work in this regard. Of course as a remake it is very possible some of the better scare moments have simply been lifted from the original film. I would be very keen to see the original and compare it to this for that reason. At any rate, all due credit to whichever version thought up using photographs as the only proper means of seeing a ghost, not to mention its creepy revelation during the film's climax.

Sadly the rest of the film struggles a bit to match those great moments. Joshua Jackson is a flat, generally unlikeable male lead. Rachael Taylor does a lot better, but struggles somewhat with maintaining her American accent. It is a nice surprise to see Megumi Okina in the cast as the mysterious ghost (also named Megumi, as it happens) - she had previously starred in Takashi Shimizu's 2003 film Ju-On: The Grudge.

The time in-between the horror moments is relatively slow and weak, which is a surprise given the film's truncated running time (85 minutes including credits). It is as if the film is satisfied with getting from one plot point to the next but does not feel the need to exert itself along the way. The result is a very generic, Japanese-flavoured horror movie. It does its job to a satisfactory extent, but little more. The bottom line is that there are better and more original horror films out there that deserve viewing a lot more than this one does.

This is also not the only remake of Shutter: it was remade twice in India, once in Tamil and once in Hindi. Clearly the story has piqued interest. I wonder if those remakes are any better than this one.
Posted by Grant at 5:36 PM