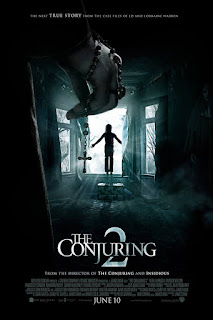 A single mother and her children are terrorised by supernatural activity in their house. After their experience gets national television coverage, the Catholic Church invites paranormal investigators Lorraine (Vera Farmiga) and Ed Warren (Patrick Wilson) to investigate.

The Conjuring 2 sees the principal cast and crew of the 2013 original return for another supernatural horror film based around the real-life self-professed demonologists Lorraine and Ed Warren. In this case the film focuses on the widely publicised "Enfield Poltergeist" of 1977.

For pre-existing fans of the original film, this is a worthy and entertaining follow-up. For fans of supernatural horror movies, it will very likely satisfy your urge for uneasy scares and 'jump' moments. For anybody not overly enamoured with the genre this slick but essentially by-the-numbers movie will be unlikely to change your opinion. As the saying goes: expect what you get, and you will get what you expect.

The film does run a very enjoyable line in frightening imagery. There is the Enfield ghost itself, but also a surreal demonic nun that appears to haunt Lorraine from the film's opening scene. Director James Wan keeps the scary moments varied, from creepy shadows in the background to apparitions leaping out at the screen without warning to quite elaborate scenes of surreal terror. Some moments work better than others, but altogether they make for wonderful entertainment. This is a deliberately old-fashioned film, and accordingly its scares appear to work best when they are more subtle. There is one demonic character - the Crooked Man - that is realised too overtly with CGI, to its detriment.

One of the highlights of the first Conjuring was its cast, and that quality continues here. Vera Farmiga and Patrick Wilson are great as the Warrens, presenting themselves as genuinely heroic and loving partners. That is a bit problematic - I will get to that in a moment - but separate from any external factors they make for immensely watchable protagonists. Also strong is Frances O'Connor as terrified mother Peggy Hodgson, whose children report strange disturbances in the night before one of her daughters appears to get possessed.

The period setting is a particular highlight. By setting the story in the same time and place as the purported real events, the film gains an enormous amount of atmosphere. It also helps to position The Conjuring 2 alongside similar supernatural horrors of the time. The 1970s seem to be the peak decade when scientific investigation crossed over with ideas of the supernatural, and as a result the film feels more realistic than it would if set in the 2010s.

If the film has a drawback, it is the same one that dogged the original Conjuring three years ago. Both films go a long way to mythologise the Warrens, two fairly notorious real-life investigators of the supernatural and the occult. There is extensive evidence to show the Warrens' various cases did not involve supernatural phenomena - such phenomena likely does not exist - but it remains unclear whether they themselves were deluded or if they were deliberately preying on the vulnerable, easily suggestible or mentally unwell. Whatever the case, there is an element to both films that feels a trifle off. They enthuse over how they are 'based on a true story', even though with reasonably certainly neither film depicts anything close to the real-world events. If you can put these issues aside, however, The Conjuring 2 presents itself as a worthy sequel and a very enjoyable horror movie. I would be happy to see Wan and his cast return for a third film in the future.
Posted by Grant at 8:57 AM