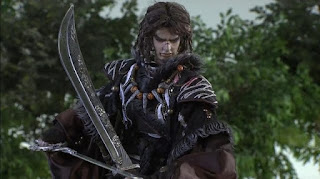 Dan Fei runs through the storm with her brother Heng. A group of swordsmen ambush them - they are after a legendary sword Fei carries - and while her brother is killed Fei manages to escape. She next runs into a travelling stranger, Bu Huan, who reluctantly defends her when the Xuan Gui Zong clan return to take the sword once and for all.

Thunderbolt Fantasy is a rather surprising new anime series. This 13-part series is a Japanese-Taiwanese co-production, one written by noted author and script writer Gen Urobuchi (Black Lagoon, Psycho Pass, Fate/Zero). It tells a typical Chinese wuxia adventure full of super-human sword-wielding vigilantes, rich and extensive back stories, and lengthy speeches and narration. It is full of portent and gravitas - so much, in fact, that it is often difficult to treat this first episode seriously.

Oh, and it's also performed in live-action with glove and rod puppets.

Puppet-based anime is not a new invention. In 1980 Fuji TV broadcast Go Nagai's X-Bomber, which was an odd blend of Thunderbirds and Macross, and just two years ago NHK found some success with a puppet-based Sherlock Holmes. This particular project sees Gen collaborating with noted Taiwanese company Pili International, whose long-running puppet series Pili has been broadcast since 1985. The company operates the largest dedicated puppet soundstage in the world, and based on the intricate action and sword-play achieved in "Code of Umbrellas" their prestigious reputation is well-deserved.

That said, the immense talent brought to bear on Thunderbolt Fantasy is not enough to save it from itself. For one thing the storyline is strikingly lazy and stereotypical. One group of swordsmen pursue a young woman. She is protected by yet another swordsman. There are fights and duels, not to mention philosophical and spiritual mutterings, magical spells, and a rather unexpected climax where a character deliberately decapitates himself. When it is not a little bit dull it is actually rather silly.

While it feels as if there is too little to the story, there is almost too much to the production. The action is backed by a seemingly non-stop power metal soundtrack. The sword fights, while executed brilliantly, are almost too fast, and when combined with some frantic editing it is often a little difficult to understand precisely what is happening on screen.

The series is currently streaming via Crunchyroll, and as the first readily available and subtitled puppetry series in some time it is worth checking out at least this episode to get a look at the sort of fantasy epics that Pili International are producing. Certainly there is nothing else on television right that is quite like it. Whether or not the novelty is enough to sustain an international audience for another 12 episodes is a question I do not feel comfortable predicting.

I do not know if I am likely to watch past this one episode. For now I am just giving it the thumbs-up for its puppetry and design work, but there really is not an interesting or particularly clear story going on here.
Posted by Grant at 5:06 PM