Star Trek: The Next Generation: "Darmok" 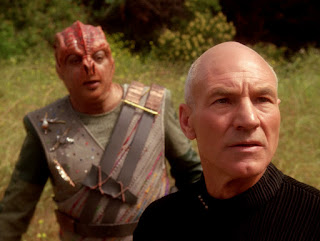 It is 30 September 1991 and time for another episode of Star Trek: The Next Generation.

The Enterprise has been dispatched to make diplomatic overtures towards the Tamarians, a reclusive and seemingly unintelligible species. When Picard (Patrick Stewart) attempts to make contact he is kidnapped and transported down to the planet below. While the Enterprise crew struggle to rescue him, he and the Tamarian captain (Paul Winfield) share an encounter and begin to understand one another.

"Darmok" is one of the most wonderful episodes of Star Trek ever made: not simply for The Next Generation but for the franchise as a whole. It is based around a fabulous concept, is beautifully realised, and regularly hits the Top 5 of any "best of" lists and polls. "Redemption II" wrapped up the Season 4 cliffhanger well enough, but it is "Darmok" that launches Season 5 into action. To my mind it is the best year The Next Generation had.

The central concept of the episode is a failure to communicate. Star Trek effectively hand-waves issues of communication by having all the characters speak English while occasionally referencing "universal translators". That works to an extent, but what if the entire manner in which a culture speaks is simply too strange to translate? That is the problem here: the Tamarians speak only in metaphors based on their collective mythology. A historical figure named Shaka experienced failure when some ancient city he defended was invaded, thus "Shaka, when the walls fell" is a Tamarian expression of defeat. Of course if you pull at the threads this conceit collapses very quickly - it is doubtful such a culture could ever sustain itself in this fashion. That is hardly the point: it is a technique to reach at the real story, which is Picard learning how to communicate with an alien that really is quite alien to him.

The various Tamarian phrases have helped to make this episode a cult favourite among Star Trek enthusiasts. One only needs to quote "Shaka, when the walls fell" on social media to quickly get replies of "Darmok and Jelad at Tenagra", or "Temba, his arms wide".

The idea of putting Picard and the Tamarian captain Dathon alone on a planet together is a good one, because it means the episode falls back on The Next Generation's best and most fail-proof story technique: standing back and letting Patrick Stewart act. He and Paul Winfield do a phenomenal job, with most captains visibly doing their best to communicate but failing to their growing frustration.

This is a flat-out brilliant episode. It is well paced, thoughtfully developed and rich with excellent moments of dialogue and character. It remains one of my favourites - possibly my actual favourite from all seven seasons. This fifth year is now running two for two; the quality ratio holds at 100 per cent.
Posted by Grant at 10:15 AM