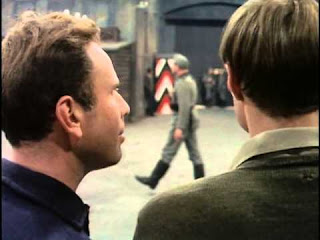 It is 14 December 1972, and time for another episode of Colditz.

One of the German guards needs money desperately to pay for a lover's abortion, and the Colditz prisoners attempt to use that to their advantage. Meanwhile Colonel Preston (Jack Hedley) receives upsetting news from home.

As always, this ninth episode of Colditz is based on a true story. There was an actual attempt to bribe a guard, in order to get him to turn the other way while a group of British officers escaped via a tunnel. It is this general fidelity to the facts that had made this such an entertaining series. The storylines are surprisingly varied, and the tone shifts quite nicely from episode to episode. This episode splits into two evenly divided stories: the latest escape attempt, and Preston's overwhelmingly awful news. His wife has died while driving an ambulance, and he has no idea who is caring for his two young children - or indeed where they are.

Jack Hedley gives an incredibly understated performance. To a large extent he is played an archetype: the stiff upper-lipped British military officer, loathe to show emotion or lose any sort of control. Hedley does it in a wonderfully naturalistic manner though, showing off in very discreet and subtle ways that Preston is constantly one step away from curling into a ball and bawling with grief. He never does. It's a performance full of pained hesitation and awkward silences. Bernard Hepton is also very good here as the Kommandant. He visibly feels badly for Preston, but of course there is a line between them and he cannot afford to cross it. At the episode's end Preston has been captured in the attempted escape, and dragged before the Kommandant, and you can see the regret on Hepton's face. The Kommandant really does feel let down, whether rightly or wrongly, and it seems that for now there has been a little bit more distance pushed between the two men.

Elsewhere in the episode, Player (Christopher Neame) needs dental treatment. While having a tooth filled he overhears one of the guards furtively discussing with the dental nurse her need for 1,000 marks to have an abortion. Once back at Colditz Player reveals the information to his comrades, and the plan is struck to bribe the guard 1,000 marks in return for him simply looking the other way while they use a tunnel to escape. The episode strings the viewer along for a remarkable length of time: Carrington (Robert Wagner) is tasked with getting close to the guard and making the offer, and it really does seem like the German soldier has accepted it. When the escape attempt is foiled, and it turns out the guard went straight to his superiors with the British escape plan, it really does seem like a shock. There was no vacillation on the guard's part at all. He encountered a plan and immediately reported it. This is of course what happens when you base your television drama on real events rather than invented ones: professional disciplined soldiers actually do their jobs.

Overall "Bribery and Corruption" does feel like a minor episode of Colditz. It is solidly developed and certainly very well acted, but it lacks the energy and originality of other more accomplished episodes. That seems a minor quibble, however, since overall it's another strong episode for a series that has not put a foot wrong yet.
Posted by Grant at 9:02 AM