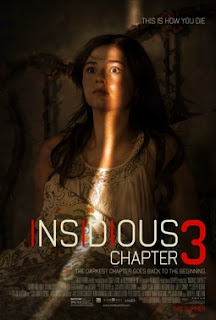 Quinn Brenner (Stefanie Scott) is a teenager mourning the death of her mother. In attempting to contact her mother's spirit she instead attracts a malevolent entity that has designs on her soul. In desperation her father (Dermot Mulroney) reaches out to retired psychic Elise Rainer (Lin Shaye) - but Elise has sworn off tackling evil spirits for good.

Insidious Chapter 3 jumps back - as seems to be the wont of a growing number of horror sequels - to tell the origin story of psychic crusader Elise Rainer and her two offsiders Specs (Leigh Whannell) and Tucker (Angus Sampson). It is an odd choice for Leigh Whannell, who both writes and directs this prequel. On the one hand, jumping back a few years enables him to tell another story with Elise, Specs and Tucker before their parted ways at the end of the original Insidious. It also satisfies any curiosity over how three such disparate people wound up working together. On the other hand, we don't actually need to know how they got together. It is unnecessary information, and knowing all three will be alive and well in the future takes away quite a bit of suspense from this third film. There is also an irritating issue in that Insidious Chapter 2 ended in a really interesting place. I am much more interested in seeing what happens after the original two films that in filling in the gaps of what happened before them.

It takes a while for this third film to get going. There's a whole new protagonist getting haunted by some otherworldly figure, and she brings with her a whole new family of supporting characters. The early scenes are easily the film's least impressive. The characters seem to talk in fairly predictable and stereotypical ways, and the supernatural scenes feel fairly rote and unoriginal. Stefanie Scott does a great job with Quinn, and immediately draws a lot of sympathy, but Dermot Mulroney is saddled with a fairly predictable role as her father and Tate Berney is rather weak and annoying as younger brother Alex.

Once the film picks up, however, it gets a lot more effective and atmospheric. There is a new ghostly figure to match the red-faced demon of the original and the black bride of the sequel. This one is a grossly disfigured man, with an emaciated body and an oxygen mask. Every step he takes leaves a sticky residue of tar on the floor. One thing the Whannell/Wan horror franchises have always been good at is visually striking antagonists, and Chapter 3 is no exception. There are some genuinely good moments of horror throughout: they vary in tone and they have a distinctive look to them.

The film takes a surprisingly long time to finally bring together the Brenners, Elise, and Specs and Tucker. Once all of the elements are in play the climax feels remarkably brief. It is almost an Insidious film in name only: to a large extent it could be any generic supernatural horror movie. It has a lot of strong material, particularly in its second half, but as part of an ongoing franchise it is feeling increasingly dislocated.

There is already a fourth Insidious film in production, and I think the franchise now sits at an interesting crossroads. There is certainly room for additional sequels showing off the adventures of Elise, Specs and Tucker prior to the first film. Personally I am drawn to the idea of the sequel suggested by the end of Chapter 2 that we were sadly denied this time around: Specs and Tucker still fighting the supernatural, but aided by Elise from beyond the grave. That would be a wonderfully inventive set-up indeed.
Posted by Grant at 9:14 AM