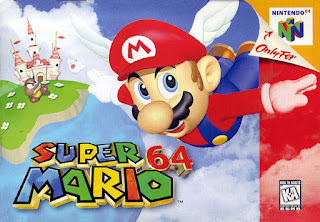 In many respects that third dimension was something the Super Mario franchise had been waiting for all that time. There had always been a sense of exploration about the earlier 2D platformers - a secret level here, a hidden object there, but the expansion into a 3D environment actually encouraged and fostered it. Now there were levels with multiple goals, different routes, and all manner of surprises and secrets. As a launch title it allowed the Nintendo 64 to make an immediate impact, and the game was so well designed it really wasn't bested by any other title (bar one) for the console's entire life-span. Super Mario 64 felt different to its predecessors. Despite coming from a company famous for developing iterative sequels with constant small improvements from game to game, this one felt like a small revolution in game design.

The visual design was charming, the gameplay was sufficiently varied and challenging, and there was enough content to keep pretty much any player satisfied for a really long time. The level design remains astonishing: just the right amount of challenge, and just the right amount of pace. There is something remarkable about just how precisely designed the Mario games have always been: not an obstacle out of place, nor an enemy character too hard to defeat. They are simply pure entertainment - and Super Mario 64 is arguably the most entertaining of the lot.

Possibly its single-greatest achievement was its camera orientation. While this was not the first attempt at 3D environments, previous titles had always struggled with orienting the visual perspective around the playable character. Too often players would find themselves unable to properly see what the game was doing, and wind up fruitlessly losing a life by running into a monster or plunging down an unseen cliff-face. Very clever programming enabled Super Mario 64 to do a much better job of keeping the player aware of the surrounding game world - and that led to easier play, and much more enjoyable experience.

Time has passed, and the graphics have dated considerably, but it is remarkable how immediately playable Super Mario 64 has remained. It was re-released in 2004 for the Nintendo DS handheld console, and was pretty much just as playable there as it was back on the N64. I still play this game today. There's only one Nintendo 64 title I enjoyed more.
Posted by Grant at 5:03 PM