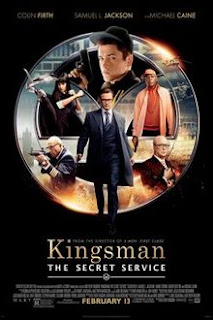 Eggsy (Taron Egerton) is an unemployed Londoner given the opportunity to join a top-secret elite spy agency. Under the tutelage of veteran agent Harry Hart (Colin Firth), code-named "Galahad", he enters the training program to join the mysterious Kingsmen. At the same time Hart has his hands full investigating the eccentric billionaire Richmond Valentine (Samuel L. Jackson), who has a diabolical plan for the future of humanity.

So Kingsman: The Secret Service is a 2015 action-comedy directed by Matthew Vaughn, and reunites Vaughn with comic book writer Mark Millar. A few years back Vaughn directed the film adaptation of Millar's comic book series Kickass, and he does it again here by adapting Millar's later work The Secret Service. There is a peculiar style to Millar's work. His storylines are almost universally based on pastiche, and centre on simple "What if?" premises. What if an ordinary teenager tried to become a superhero? What if Batman was evil? What would Flash Gordon be like as an old man? In Kingsman the premise is, effectively, what if a lower-class man got to become James Bond?

It is the sort of narrative hook that works very well when it comes to selling a property to a Hollywood studio, so it is no surprise that Millar has successfully sold the rights to pretty much every original comic series he has written. It does not entirely lead to well-developed, interesting stories.

There are some fairly huge problems with Kingsman that stop it from being a genuinely great film. The ingredients are certainly all there. The film boasts an impressive cast: Taron Egerton is a very charismatic and likeable actor, and he is supported by not only Firth and Jackson but also Michael Caine, Mark Strong, Jack Davenport, Sofia Boutella, Sophie Cookson and Mark Hamill. There are also some genuinely funny subversions of the typical James Bond stereotype, and some excellently staged action sequences. Where the film falls down is that it does not seem able to decide precisely what kind of a film it is.

There is a lot in Kingsman that effectively works as a class-based interrogation of the James Bond movie franchise. The character of Eggsy subverts the standard suave, upper-class depiction of the British secret agent, often beating his posh competitors at their own game. The problem is that by the film's climax he has gone from subverting the depiction to aping it instead. While presenting a broad parody of the Roger Moore-style James Bond film, Kingsman also cannot help from aspiring towards it at the same time. It is a profoundly mixed-up film. This sort of off-kilter attempt to have its cake at eat it as well also leads to scenes of comedy banging roughly up against relatively dramatic moments, and over-the-top slapstick colliding with quite brutal and gory violence.

Much of the disconnect between the film's various portions feels an awful lot like Mark Millar running on automatic. He has had a problem with puerile excesses of violence in many of his works, and it seems Kingsman is no different. There are several moments where the film seems to try and shock the viewer - a mass slaughter in a church here, a remarkably misjudged anal sex joke there - and for this particular viewer it pretty much failed every time. I am loathe to blame screenwriter Jane Goldman, since as far as I can tell she has captured Millar's style very accurately. The problem lies at the source.

There is still good here: Colin Firth is a wonderfully unexpected action star, some of the action is rather well staged and shot, and Taron Egerton is a very likeable lead actor. It is simply that there is so much more that simply fails to gel together, and the end result it a terrible mess. Very forgiving viewers will potentially find a lot of enjoy here; I am not one of them.
Posted by Grant at 7:31 AM