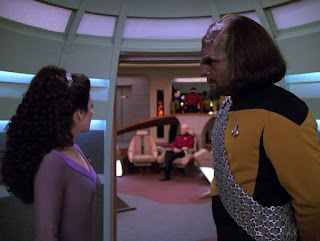 It is 6 January 1992, and time for another episode of Star Trek: The Next Generation.

While the Enterprise is dispatched to aid in the testing an entirely new starship propulsion method, Worf (Michael Dorn) finds himself unwillingly forced to take over raising his son Alexander (Brian Bonsall). It is a task for which he is ill-prepared.

Star Trek: The Next Generation gains another recurring character this episode, with Alexander Roschenko moving onboard the Enterprise to stay with his father. It is a mixed blessing. On the one hand the episode allows for new angles and fresh challenges for Worf. On the other it does force the episode into a rather low-stakes storyline about a new father trying to cope with a badly behaved child. It is not the most enjoyable episode of the season by a long stretch. It would be unfair to describe it as actively bad, but it certainly is not particular good either.

It is a weird collection of scenes, including Worf going to a parents-and-children day at school, and a parent-teacher conference, and telling off Alexander by explaining about Klingon mythology and honour. Michael Dorn plays the scenes incredibly well, with a sort of stoic and awkward embarrassment, but they still feel remarkably unnecessary for an entire episode. Brian Bonsall plays Alexander in this second appearance for the character. Alexander debuted back in Season 4's "Reunion", and even though it is only a year later in terms of story time he appears to have aged by about three. If Klingons age more rapidly than human children, it is not mentioned here.

The slight nature of this A-plot would be potentially forgivable if the B-plot was more interesting, but sadly it seems like a fairly lacklustre story as well. The Enterprise has travelled to the planet Bilana II to assist in the experimental test flight of a starship using a 'soliton wave'. It is rather cute watching La Forge (LeVar Burton) gush over the potential significance of the test, comparing it to being at the first warp drive flight by Zephram Cochrane. Five years from this episode a time-travelling La Forge will be on that first warp drive flight. At any rate the experiment is a failure and results in a large wave of energy rushing through space at warp speed, on a direct path to obliterate another planet. In practice this means the cast looking pensive on the bridge while watching a visual effect. It isn't particularly interesting, and with the Worf-Alexander plot leaving much to be desired there is not a lot here to recommend.

Michael Dorn does a great job, and Worf's predicament allows for a rare scene of Counselor Troi (Marina Sirtis) actually doing her job. That really is the best praise I can level at "New Ground". While there are plenty of creative directions that might be taken with Worf and Alexander in the future, this episode does not follow them. It leaves Season 5 with seven good episode out of 10, and a quality ratio of 70 per cent.
Posted by Grant at 5:01 PM