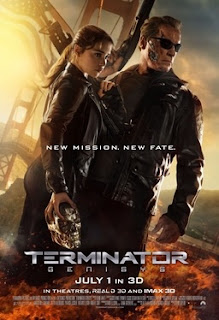 Here we go: The Terminator was a stunning independent science fiction horror film. Terminator 2: Judgment Day was effectively a high-budget remake, re-playing the same story beats but in a much larger and more explosive fashion and with a lot more emotional depth and experience behind the camera. Terminator 3: Rise of the Machines was effectively a fan film: a new film-maker and production team attempting to deliver the same kinds of thrills and action sequences all over again, with understandably diminishing returns. Terminator: Salvation saw yet another director and production team try something relatively new with the concept and universe, but was murderously crippled by studio interference and second-guessing. One of its bigger flaws was its complexity: the concept of The Terminator is stripped-back action, effectively an ongoing high-stakes chase sequence played over an entire film.

Terminator: Genisys, with - you guessed it - yet another director and production team is a colossal misfire on a scale I find difficult to comprehend. It takes the unnecessary complexity of the previous film not as a warning but as a challenge, and manages to twist itself into a frantic, charmless nonsense. This is a film that wilfully stumbles from the future to the past to a different future while spending an awful lot of its time introducing characters and refusing to explain what is going on. Like most people I enjoyed the first two Terminator films. I found the third unnecessary but enjoyable enough as a nostalgic action flick. I found the fourth hopelessly muddled and compromised, but with enough glimmers of potential to get me through it and not actively dislike it. I found this fifth film genuinely unwatchable. I finished it at least, mainly because I wished to review it fairly, but I cannot claim to have fully understood it.

My best attempt at a summary goes like this: John Connor (Jason Clarke) sends Kyle Reese (Jai Courtney) back to 1984 to protect his mother Sarah Connor (Emilia Clarke) from a Terminator. When Kyle gets to 1984 he finds himself immediately attacked by a different Terminator, and then rescued by a third alongside a well-trained gun-wielding alternative version of Sarah. Together they then travel to 2017 based on visions Kyle is having to stop a different Skynet from activating and taking over the world. On their way they get attacked by John Connor, now also in 2017 but mysteriously transformed into another sort of Terminator.

It all brings to mind an episode of Red Dwarf ("I'm the Rimmer from the double double future..."). It is time travel taken to a nonsensical extreme, and an extreme that goes largely unexplained at that. There is never really a point where the film grounds itself or allows the audience time to engage with the characters and emotionally invest in their story.

The film's first 20 minutes are devoted to a broad remake of the original Terminator only with less energy and utterly charmless actors. Jai Courtney is simply not very interesting as Reese. I do not think he is necessarily a bad actor, but he lacks presence. Jason Clarke is bizarrely awful as John Connor, although in his defence he's working from a poor script and is saddled with unforgivably unconvincing prosthetic make-up. Emilia Clarke does not convince as Sarah Connor. She is too physically slight and short to be a believable action heroine in the manner the script demands her to be. Bizarrely she also looks far too young for the part, despite being three years older than Linda Hamilton was back in the original Terminator. As for Arnold Schwarzenegger, he simply moves through the film with the look of a man who knows he deserves better. It is a shame to see him take his most iconic movie role and drive it just that little further into the ground. Byung-Hun Lee makes a convincing T-1000 Terminator - that's pretty much the nicest thing I can say about the cast.

Time travel movies rise and fall based on how they explain their logic. Back to the Future does this really well, as does the original Terminator. The subsequent sequels handle it less successfully. Genisys simply does not bother to try. We never learn why a Terminator was sent to kill Sarah Connor as a child. We never learn who sent another Terminator to protect her - one that she irritatingly calls "Pops". We never learn how Skynet sends yet another Terminator to 1984 to kill Kyle Reese, or exactly what it did to John Connor in 2027 to turn him into a villain, or how travelling to 2017 helps in any way to stop an artificial intelligence intended to come online in 1997 (or indeed 2003, if one is to assume Rise of the Machines and Salvation still fit somewhere in the timeline).

After about three minutes of this film it becomes very difficult to care what happens. The film never recovers. Things explode. People shoot at each other. The ambition of the visual effects regularly exceed their budget - there is a severely unconvincing helicopter chase towards the climax. The world is saved, somehow, although the film is never entirely clear or how. A mid-credit sequences reveals the world is still in danger of course. Thankfully poor box office returns have defeated Skynet in a way that Sarah and Kyle never could.

Sequels get made all the time. Some are good. Some are bad. Some are occasionally so jaw-droppingly awful that one wonders how on Earth things got so bad. Why did no one say? Why did the studio fail to pay attention? Why did no one care? Terminator: Genisys is an appalling, tedious chore of a film. I can only hope its failure finally brings the franchise to a much-needed end.
Posted by Grant at 7:26 AM